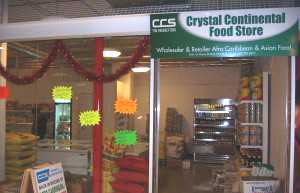 Crystal Continental is a Afro-Caribbean and Asian food store situated in the Moore Street Mall in Dublin 1.

Caribbean food is built on many influences including the indigenous Caribs, Africans, Indians and Chinese. With such diversity, it’s not surprising that this store is crammed with not just the familiar Indian and Asian ingredients but more unusual foods.

I purchased inexpensive fresh fruit and vegetables, spices, canned goods and condiments. There are also huge freezers full of curious looking meat and fish including the Tilpia fish and Milk fish. This culinary wonderland is also a great place to pick up a bargain; one kilo of giant shrimps for only €9.99. I suggest you go in with a plan though, or it can get confusing.

Later in the week I will show you how to build up your Caribbean larder and a delicious recipe to trifle with. It’s not trifle though!