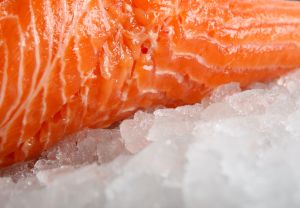 Learning how to cook, Step Two. Develop an exaggerated sense of your own culinary skills, based on only one successful soup, and attempt to make meringues with chocolate chips and almond (oh so theoretically good…). Fail miserably. Fail like you haven’t failed since that school biology test when the, to put it mildly, deviation of your answers from accepted scientific knowledge almost made you, in a bid to save face, become a creationist.

Step Three. Try again and fail better. This week I thought I’d branch out from Mr Oliver and use a recipe a good friend told me was “fool-proof, even for you”: Salmon in Parma Ham with Roasted Sweet Potatoes. And she was right.

The first time I cooked it I’d just come in from the pub and there were some…timing issues…but the second time was grand, pretty easy even. This recipe is for 4 people.

The first thing you do is preheat your oven to 180 degrees/160 fan/gas mark 4. I did this, for the first time, without asking my housemate how to turn the oven on, applause please. Then you chop up 2 sweet potatoes into 2cm pieces. I’d be lying if I said there weren’t some Excalibur moments with the sweet potatoes; I will not, it seems, ever be king of pre-Christian Britain, which is a good thing for a lot of reasons. I’d also be lying if I said I had a clue what a 2cm piece looks like. I just chopped ’em up into small and, as I got bored, gradually less small pieces. This meant that they cooked unevenly but I have made my peace with that.

Then you toss these in a roasting tin with a tablespoon of chopped up sage (a difficult herb for me to find what with my night grocery-shopping ways but not essential to the recipe I think) and a tablespoon of olive oil for about 10-12 minutes (15-20 in my oven so give them more if they need it)…uh oh…turning them half way through, which I now realise I forgot to do (d’oh!).

Wrap a slice of parma ham around each of the 4 salmon fillets and heat the frying pan with a tablespoon of olive oil. Cook the fish for about 2 minutes on each side (I did this for 1 minute each side the second time and it worked out better – overcooked fish is a crime against us all), then put the fillets on top of the sweet potatoes for about 5 minutes (in my oven 7 minutes).

Meanwhile, chop up a handful of coriander with a clove of garlic and the juice of half a lemon and 2 spring onions (the second time I left out the onions and used lime juice instead and think it was way nicer, but I’ve always been more of a lime in my gin-and-tonic girl too) and, if you want, whizz these in a mixer.

When the stuff in the oven is ready, stick ’em on a plate with a little bit of the lemon/lime goo drizzled on top. Easy and tasty! Salmon and sweet potato go really well together – who knew! And if you throw on a bit of avocado too, it doesn’t seem to hurt any. Apart from the sage, everything was really easy and inexpensive to get in Lidl and Dunnes. I have to say though, when I marry George Clooney or similar, I’m going to hire someone else to chop up the sweet potatoes.

PS Now that I have the sage, what should I do with the rest of it? Any recipes gratefully received!