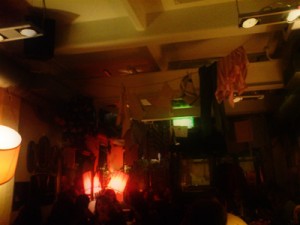 "If you like good food, good fun and a whole lotta crazy crap on the walls..."

Shebeen Chic is the latest restaurant to appear in that horribly cursed spot near The Globe on South Great George’s St, which has seen about four restaurants come and go in the last five years.  The name and concept caused a considerable amount of scoffing when it opened, but it seems to have been doing very well, with quite a lot of buzz around it.  It’s owned by the same group that own Cafe Bar Deli and Eden, and was touted as an ecological venue as the interior is made up of recycled materials.

I went there on Friday night with my friend Catherine, as we’d both heard lots of mixed reports and were interested to see for ourselves.  We decided to share a burger and a boxty – a potato pancake that our waitress told us was somewhere between starter and main course size.

What was good about it?

What was bad about it?

Our meal came to €37 for one main, one kind-of-main and two beers.  Neither of us were terribly impressed with Shebeen Chic.  A recycled interior is a nice idea, but it’s a bit meaningless when it’s paired with such overpriced food.  It was busy when we were in there, but I’m wondering if style-over-substance places like this will continue to see much traffic.  Don’t we have more sense these days?