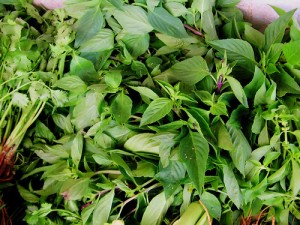 Each trip to the supermarket brings a fresh disappointment.  I arrive in naive anticipation of new and interesting fruits and vegetables, only to be confronted by more of the same.

Peppers, mangoes, pineapples, the same selection of berries. Leeks, parsnips, sweet potatoes and a few relatively new additions such as celeriac. A tokenistic “exotic fruit” section overloaded with such Little Shop of Horrors extras as sharon “fruit” (truly, an argument for the existence of pure evil in evolution).

It’s not that I’ve anything against the vast majority of these particular fruits and vegetables. On the contrary. But I think supermarkets and fruit and vegetable distributors do them a huge disservice, because what we get – with the occasional breakthrough apple flown in from the furthest reaches of the galaxy – represents just a fraction of the diversity of edible plant life. They’re worth more than this.

It’s stating the obvious to point out that supermarkets and major distributors now control and decide what we eat, when we eat it, and with what. I’d like to wrestle just a little bit of power from them, particularly in light of their recent profiteering and sneaky price hiking. Maybe a little herb garden or vegetable patch, combined with use of local ingredients, would reduce my food bill and be a positive environmental baby step.

I’ve had the greatest of intentions to do something this for many years now. Two years ago in Wicklow, I thought I’d kick off by growing some herbs. The fantasy: I’d get really good at this and  start a  productive, year-round garden, adopt a few chickens and pigs, and supplement my diet by wild food like hops, seaweed and elderberries. I’d do less paid work because I’d be grow most of my own food and I’d live a frugal, ridiculous, idealised rural existence, so people would laugh at me, call me one of the cunning folk, and eventually burn me as a witch.

The reality: I began with parsley and chives but I didn’t have a clue what I was doing. I was working all the time so completely neglected them. The parsley went to seed almost immediately, and despite my good  intentions I didn’t make the effort again. But herbs can’t just grow on good intentions. Oh, and I spent the summer napping, so that ruled out the wild food.

This year! I’m going to do something about it. So my sister Barbara got me a subscription to to the Irish Seed Savers Association. They’ve been around since 1991, and their aim is to preserve a very wide range of native fruit and vegetables – mostly European but also crops from around the world – by creating a seed bank. At the moment, they’ve hundreds of different types of potatoes, squashes, cabbages, swedes, radishes, melons, peas, beans, grains and grasses, carrots, peppers, salads, and herbs. And how do you like their apples? They also run educational courses to help people set up their own garden.

A note from Jo Newton, the editor of their catalogue,  resonated with me:

I’m looking up at the grapevine, earlier in the year covered in promising bunches of fruit that then failed to develop, sweeten and ripen, succumbing to the moisture-ridden atmosphere… I’m not going to starve… Grow enough diversity, so no matter what the weather gives, something will survive and bloom.

Where does all our food begin? With the seed – and here I am: in these days of recession and economic banking crises, I am glad to be a custodian of a ‘seed bank.’ When you come right down to it, it seems more secure than money. 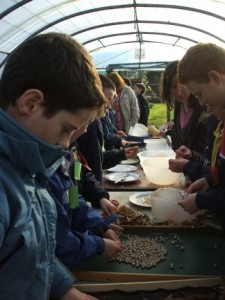 So, no more excuses. Ok, maybe some. Occasionally. If I can start off with some SeedSaver’s herbs- white mustard and sacred basil, a less wussy cousin of the usual basil that can be grown outdoors in Ireland – maybe it will give me the confidence to branch out. Given that there’s still four foot of snow outside my front door, I’m not sure if I’ll have much success this high up. But I’ll give it a go.

I’m going to start growing a few indoors and see how I get on. For the past two years, I’ve managed to be the world’s worst gardener. I buy plants and stare blankly at them for hours rather than water them, and of course they die.  So I can’t promise I won’t completely forget about my herbs. But I’ll keep you posted.