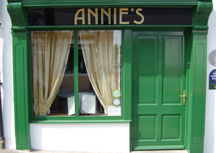 I had two smashing meals in West Cork over the May Bank Holiday weekend – the Stuffed Olive in Bantry and Annie’s in Ballydehob.

I had never eaten there before but had dealt with the very pleasant owner over the phone last summer, when I rang up to pay for my parents’ lunch on my father’s birthday. It turned out she doesn’t take any kind of credit or debit card but she let me send her a cheque and even brought out a cake with a candle on it to them, leading to mortification all round. So I had good feelings for the place before I walked in the door.

Nothing disappointed. I had poached salmon with a variety of salads (green lentil, feta and chorizo, cucumber and dill) and my friends both had smoked chicken with a curried bulgar wheat salad, all of which was really good. There was olive bread for all and we had a tasty glass of white wine each too, which we had because it was the only wine that was chilled but, if we’d had choice, we couldn’t have chosen better. There was also great coffee. And it all came to about €34 for the three of us.

Next up is Annie’s in Ballydehob, where I have eaten several times but which I seem to love more and more each time. If there were a religion of Heartiness, Annie’s would have church status. There is a strong emphasis on fish, on local duck and beef and generally on eating ‘til you fall over. And there are also some fantastic desserts, including the ice-cream which Annie makes herself.

The tricky thing with this restaurant is that it is quite expensive, for me at least, in that main courses tend to cost from about €27 to €30. On the plus side, the portions are massive and the quality is absolutely top-notch, with the freshest and best ingredients. This time, I didn’t have a starter, because I knew I’d be rolling out the door anyway, but my mother had a crab and avocado bake thing that she always has and adores. Then, I had the Skeaghanore duck, which was both delicious and unfinishable in quantity and my mother had the hake, which was so fresh its ocean friends hadn’t even reported it missing yet. These came with side dishes included (red cabbage, mixed veg, mashed potato and chips).

Finally, while I had a meringue the size of my head, she had a dessert wine.  The wine in general was gorgeous by the way, but it ought to have been, given that she picked a really expensive bottle while I wasn’t looking! Thanks Mum, if you ever learn how to use the internet.

I’m telling this all wrong though, because one of the great things about this restaurant, which people always go on about, is turning up at Levis’ pub across the road, having a pint there and waiting for the menus to be brought over to you, having your order taken there and finally getting fetched from there back over to the restaurant just in time for your excellent excellent meal.

Levis’ is one of my top three pubs in the Europe, if not the world, not least because you can still buy Corn Flakes and clothes pegs in the shop part, so it all adds to the love. It ain’t cheap, but it’s a priceless night out for all that and I know I’ll keep going back.