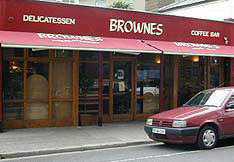 I’ve had a couple of €20 recession specials recently, one with some cackling relatives in Browne’s of Sandymount (starter, main and a glass of wine) and another with some potty-mouthed friends in the West Cork Gourmet Store in Ballydehob (starter, main and dessert). Needless to say, extra expense was incurred thanks to energetic consumption of wine in both establishments.

I’ll start with Browne’s for temporal reasons. I’d never been there before and, looking at the prices, probably wouldn’t ever have gone but for the special recessiony offer (which, by the way, does not apply to the scallops, steak or lamb). The food is, I guess, Frenchified, what with Confit de Canard and Carre D’Agneau and Flageolets L’Ail, but this does not mean that it is particularly fancy (unless it’s fancied up when you’re not getting the €20 deal, which I can nearly confirm nor deny). The menu is hilariously intimate, with an ambitious little blurb after every dish all about how amazing it is and lots of inappropriate exclamation marks. I found neither my goat’s cheese starter nor my cod main course to be amazing, but they were both very nice. My boisterous relatives were also relatively content with their pate, burgers and lamb. Mostly they obtained enormous and inexplicable amusement from the waiter’s repeated use of the word “voila!”.

Moving on then to the West Cork Gourmet Store in Ballydehob, which is run by a very nice lady called Joanne Cassidy and is usually only open during the day. For the recent bank holiday weekends, she has opened at night and I really hope she gets a lot of support and keeps doing it because the food is very very tasty indeed as well as being incredible value. I had goat’s cheese again to start but, somehow, she made what was a fairly prosaic though nice dish in Browne’s into something special. I don’t know if it was the chopped walnuts or just that the cheese was better quality but it was really lovely.

Then I had chicken with chickpeas and chorizo in a tomatoey sauce for my main and it was gorgeous! Two of my mates had a toulouse sausage dish and reported similar levels of joy through the enthusiastic use of expletives. Dessert was a pear and almond tart for the others and a carrot and orange cake for me. Both were ****ing divine.  And all of that for €20 each – staggeringly good value for a meal with no negatives. The wines were lovely too and not too pricey. The night we were there, Joanne did everything herself and did a great job at it too.

If asked to choose which was better value, it wouldn’t be difficult to pick the West Cork Gourmet Store but of course they are two entirely different situations: Different overheads, different levels of clientele; different clientele expectations; coming from work to one; coming from a swim in the Atlantic to the other. I guess though, for me, while there is an epidemic of restaurants in Dublin getting in on the special offers action (and long may that continue!), it was really interesting to see how it would work in the context of somewhere that relies on seasonal holiday-makers. Excellently, is the short answer.

If holidaying in Ireland could always include great and inexpensive meals in little eateries using local produce (and if the weather could always be the way it was over the June bank holiday), there almost wouldn’t be a reason to go away.