Our own Maria Crispy recently attended a Smirnoff launch for CheapEats, and found out some interesting facts about how well vodka goes with limes, and also about the effect of the recession on booze: 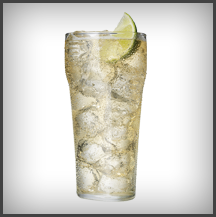 I went to a reception held by the very genial people of Smirnoff the other night, in celebration of the original vodka mule, a re-launch if you will, designed to eradicate any and all residual memories of the bottled version from back when alcopops were in their heyday. They’re going to be putting on a lot of promotions this summer, all based around a very fashionable “Circus” theme, complete with juggling and feather-on-nose-balancing and counting on the old and reliable route to building/maintaining brand loyalty: Show people a good time and make their night out a little cheaper.

It was an interesting night, not least because a vodka and ginger ale cocktail is actually pretty nice when freshly mixed and a whole lime is chopped into it, the kind of drink I think I would have coming out of my eyeballs were this even a slighter warmer climate. Also, some interesting facts about how the drinks industry is getting hit by the recession came to light. For instance, Smirnoff is down 10% on sales (which doesn’t sound as dramatic as the declines in some other sectors but represents huge financial losses.

Also, places like the Village, formerly thronged on an almost constant basis with the drunken and the damned, don’t fill up on Fridays anymore. I know I’m not there. To be frank, after the last time, I’m not sure I’m allowed in, but, otherwise, that’s a fairly noteworthy devolution. How badly are bars getting hit? And how badly do they deserve it?

The Thomas Read group’s current troubles are infamous and a fairly obvious result of over-extension (the bar in Smithfield was an unmitigated disaster, to my mind) but pubs in town still seem pretty busy, don’t they? Or have I been losing critical focus with each unit of alcohol? In general, how are people finding it out there? And have bars and pubs really not been passing on the Bulmer’s price reduction or is that just scurrilous rumour?