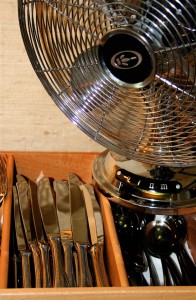 It’s all of about five minutes since we had our last comment scrap, so I thought I’d try and get another one started.  Tom Doorley recently wrote about table manners in his Megabites blog, and lists some of the table manner faux-pas that send him mental.  Some of his worst offenders: holding the knife like a pencil, failing to put your knife and fork together at the end of the meal, putting your knife in your mouth, licking plates and removing earwax with cutlery (not one I’ve seen too often, thankfully).  I’m inclined to agree with all of these – I really loathe when people pick their teeth at the table, and watching someone eat noisily with their mouth open makes my skin crawl.

It’s interesting though – some of the above prejudices are fairly reasonable. Watching food being masticated and mushed about in somone else’s mouth is almost empirically disgusting, particulary if it’s accompanied by that loud smacking noise. The same goes for those who see dinnertime  as an opportunity to evacuate their ears and gums.

But many of the conventions are, as Doorley himself admits, a bit daft.  Someone holding their knife like a pencil isn’t revolting to look at, just a bit gauche, and is that an entirely bad thing?   (I should be honest here however, and say that I do always notice when someone does it).  And there are some table manners that only the very elderly or extremely uptight still care about, such as elbows on tables.  But perhaps it makes sense to hang on to these conventions, as the alternative may be a slippery slope where suddenly everyone is licking their plates and spraying food all over each other in nice restaurants.

What do you think? Which bad table manners bother you the most? And do you think it’s important to hang on to a few conventions in order to separate us from the barbarians?