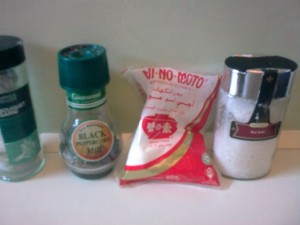 I knew it. “Mean, uncaring bastard,” they called me, but I was right – he’s not allergic to monosodium glutamate (MSG)!

A few people I know have sworn off Chinese food, convinced that it’s loaded with MSG, and equally convinced that MSG is the source of their migraine or other current ailment. But, The Guardian reports, a study published by medical journal Clinical and Experimental Allergy debunks the whole myth.

MSG, it turns out, is harmless for the overwhelmingly vast majority of people who consume it. It’s used liberally in Chinese food, and occurs naturally in such delights as soy sauce, parmesan cheese, instant noodles, seaweed, Marmite, and breast milk. You eat it. All the time. I’ve had a bag of MSG hidden away for years, although I’ve never used it. But now, at long last, the time has come to sprinkle liberally with pride.

I’m generally skeptical about food allergies; with some exceptions (such as our own lactose-intolerant Maria Crispy) it’s a bit trendy. I’ve seen many perfectly healthy people suddenly declare themselves allergic to dairy or wheat, even though Ireland is one of the most lactose-tolerant countries in the world. Now, I’m not saying you are a hypocondriac or a liar – I’ve probably never met you and you may indeed have a genuine allergy- but I do know many people who are, at least, completely deluded.

Do you have a makey-up food allergy? Or, inded, a real one?