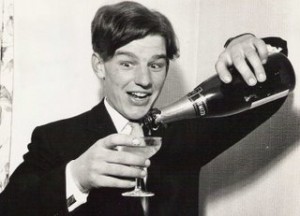 Sadly Keith Floyd, the booziest and funniest of all chefs, passed away on Monday. He was a legend. Best known for his haphazard presenting and his penchant for knocking back the vino while he was at it; kind of reminds me of my husband come to think of it. The original TV chef produced some excellent books including many on French cuisine and more recent ones on Asian food. Floyd was at his best when he was tangled up in some hilarious misadventure such as the time when a rather posh French lady told him his dish was total rubbish. Classic.

This trout dish looks very tasty, make sure the newspaper doesn’t go on fire; after all it is a Floyd recipe!

Wild trout or char, baked in newspaper (Served with the quickest hollandaise sauce in the world)

1. Remove the back bone from the fish by ripping it out using your forefinger and thumb (keep head on)

3. Wrap tightly in approximately 10 sheets of newspaper (This will help retain the flavour)

4. Bake in the oven until the paper is crisp and the fish is cooked

5. Remove from oven and cut open the newspaper to reveal the baked fish

7. Serve with hollandaise sauce, fresh steamed asparagus and a slice of lemon

To make the hollandaise sauce: Whip the egg yolks over a little heat and slowly add the melted butter. Salt to taste.