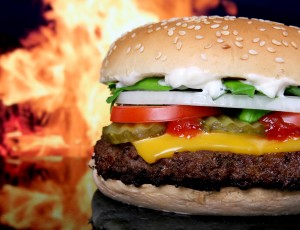 Reading in The Sunday Times at the weekend that scientists have grown meat in a laboratory for the first time made my stomach churn, but it also fascinated me as it raises a litany of ethical and practical questions.

Dutch scientists used cells from a pig to replicate growth in a petri-dish and this in-vitro meat could become commercialised within ten years.

Conventional meat production is hard on the environment and this cultured meat could significantly reduce the billions of tons of greenhouse gases emitted each year by animals. It’s a long way from the popular image of animals wandering round the farmyard in the sunshine, but then so is modern intensive farming.

Another upside would be no more slaughterhouses and battery-farms. The new in-vitro meat could also reduce the risks of diseases like swine-flu, avian flu, mad cow disease, salmonella and other diseases caused by greed and bad living conditions.

It’s claimed that it would not only be better for the planet and animal welfare, but actually healtheir for us too. The fat content in the in-vitro meat could be precisely controlled and potentially create a double-whopper that prevents heart attacks instead of causing them.

This breakthrough also raises conflicting ethical decisions for vegetarians – is it okay to eat synthetic meat – no animal was killed after all?

It really is the stuff of science fiction; if they can produce fake meat then why stop at the farm yard favourites – in the future we could be eating guilt-free monkey, elephant, kitten or even monkey stuffed with kitten. The options could be endless with designer meat. Appetites could become so outrageous that we could one day have a hankering for human flesh or even take a few of our own cells and eat our own flesh – yikes! It would give new meaning to “I made this dish myself”.

In the meantime I think we should all be eating less meat in general. I’m a meat-eater but I try to retain standards and respect the life of the animal. A whole chicken should not cost €4 which it does in many supermarkets at the moment, a life is worth more than that – there’s something wrong.

Would you eat synethic meat to save the planet?