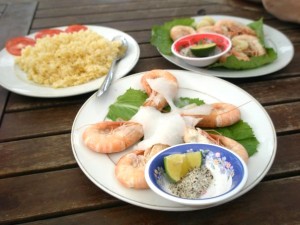 One of the many delicious meals I had in Vietnam

After my recent unplanned trip across Europe due to the ash cloud where I had to stick to a strict food budget, it got me thinking about the best and worst culinary holidays I have been on in terms of value for money.  Obviously it’s only an overview but some places stood out more than others.

In Europe, the Silver Coast along Portugal is one of the best for quality and value. Some of the nicest restaurants are off the beaten track but well worth the trip. Very unpretentious simple food that really inspires. Peter can vouch for this as we made the trip together.

Spain is also great for food and I think tapas is one of the more exciting ways to eat. There is nothing nicer than going on a food crawl and having a glass of wine at each stop. It’s a great way to try out a variety of food without having to commit to one dish – cheap too if you choose wisely.

Greece is also great for delicious food at a low price. There isn’t a whole load of choice when you’re island hopping but what you do get is great. It’s also a good destination for vegetarians with many dishes vegetable or cheese based.

France is good in terms of supermarkets and wine of course but I generally find that you have to pay over the odds to get a decent meal. I have been to France more than thirty times and have discovered that the more you pay the better the food gets which I think is a bit of a swizz – in the end it’s the same produce being used. If you have the cash you can get some delicious food, but on a budget you’re better off buying the wonderful produce available and making it yourself. Paris is a rip off if you’re on a budget, many restaurants churn out crappy onion soup and steak with pepper sauce presuming that’s what tourists want – ridiculous. Naturally it depends on where you go but in general terms I find France a letdown considering its reputation – great for everything else though.

Apart from Berlin, I wasn’t enamored with the food choices in Germany, all a bit too stodgy but the beer rocks and it’s great value too.

Italy is hit and miss depending on where you go, you can get ripped off in the bigger cities but find some lovely places to eat in hidden Italy. A reputation for being pricey, Tuscany has some amazing and unusual dishes that won’t break the bank and the pizza in Rome is outrageously good, same goes for New York.

I travelled up from New Orleans to New York a few years back and it certainly wasn’t a food holiday.  It wasn’t that it was pricey but the food was generally really unhealthy no matter what you were willing to pay. I enjoyed the Cajun food in Louisiana but there is a lot of batter involved and you feel a bit rubbish after a while – they even batter their chips.  Mississippi offered up the most amazing corn but again there was very little but heavy fatty food on offer.  By the time we got to New York we were so relieved to have so much choice, now there’s a place that suits all budgets.

Brazil is also great for food and is really cheap. They have a potato-like vegetable called manioc which is often served with prawns – one of the best dishes I have ever had. The country is generally cheap, great for seafood and everything else for that matter.

I didn’t like the food in Egypt but I think it was a matter of taste, it is very meat-focused and heavy, the sort of food you don’t want to eat in 40 degree heat.

Cuba is one of the worst culinary holidays I was ever on although an amazing country with cool people. We thought it was just us who had a disappointing food experience but speaking to others who have been it would seem that choice is generally very limited. Ham and cheese sandwiches or rice and beans. I like rice and beans but not all the time.

Vietnam was the best culinary holiday I was ever on. It was mind-blowing. At first, I found the food a bit on the simple side after experiencing the spicy flavours of Thailand but as I travelled down I realised that they have the most amazing subtle flavours. So healthy and so delicious and of course dirt cheap. The place to eat is at the side of the road where everything is freshly made. If I was to pick a winner I’d choose Vietnam.

What country would you choose as your culinary destination and who comes last?