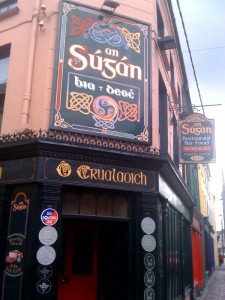 West Cork is such a beautiful place with the most astounding vistas but you know that. I was down at the Fiddlefair in Baltimore at the weekend and although it was really nippy, the music and setting made up for it. On my way down I stopped off in Clonakilty for some lunch and popped into An Sugan Seafood Bar and Restaurant.

An incredibly twee place, it has a cosy atmosphere and an old world charm that instantly makes you feel like you’re on holiday which was exactly what I was after. The barman was eccentric to say the least and as mad as a bottle of crisps – muttering to himself and then suddenly bursting into song.

Some of the dishes were a bit pricey and clearly aimed at the tourist trade. The all-day menu is served from 12 until 5.30. You can get Moules Mariniers, Bantry Bay Mussels steamed in a White Wine, Cream and Shallot Sauce for €11.90, Fresh Seafood Pie with salad and a Honey Mustard Dressing for €16.95 and Fresh Prime Fish of the day on a bed of Spring Onion and Bacon Mash with a Lemon Butter Sauce for €22.90.

However, there is value if you just pop in for lunch. The really generous An Sugan toasted special includes Bacon, Roundtower cheese, onion and tomato for €6.50. I had the Creamy Seafood Chowder served with home-made nutty brown bread. At €6.95, it was well worth it and full of delicious fresh fish and seafood. Washed down with a pint of Murphy’s I was really full but satisfied.

To be honest this isn’t the sort of place you sit around and have pints in. For a great pint of Murphy’s check out Bushes of Baltimore. A truly lovely spot, the pub has a beer garden to the front overlooking the bay of Baltimore and Inis Earcáin where you can sit and sink a pint in front of one of the best views in Ireland. Bliss. The only thing that did disgruntle me was why on earth does Murphy’s taste so rubbish in Dublin – anyone?