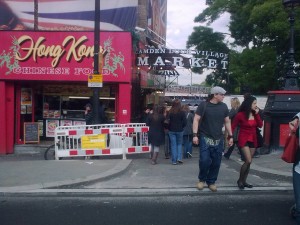 Thanks to our lovely readers for your great London tips. I followed some of your recommendations and also scoured out some of my own.

I started off in Camden. Wonderful, wonderful Camden, where people have more piercings than skin, where punk never died, and where all sorts of flower-power people mingle freely with almost every nationality in the world. From a cheap eats perspective, Camden is perfect. The Camden Lock market has stalls selling regional Swiss Alpine food alongside Brazilian, Thai, Indian, Italian, Mexican, and much more. You could quite easily wander through the Lock and the market across the road and get a reasonable light lunch or decent snack for nothing: simply accept the copious amounts of free samples that the stalls – particularly the Thai, Chinese, and Indian stalls – are desperate for you to try. Also in Camden, just beside the tube station, King of Falafel as recommended by our reader Gavin, is indeed delicious.

Camden is also home to the holier-than-thou, carbon neutral, oh-so-chic and right-on inSpiral, which looks like someone has plonked a cheap replica Hindu-style temple slap bang in the middle of London. It’s full of sprouting vegetables, raw chocolates, and yoga leaflets, and I couldn’t help but like it. A lot. The vegetarian food was really delicious and I even enjoyed the healthy “living food” desserts. We were able to have a plate of lunch and a coffee followed by a few beers, while later at night, inSpiral turns into a music venue. Maybe I’m sucked in by the hipster vibe, but I’d love to see something like this in Dublin.

Over around Angel and Islington, I really enjoyed a long and lazy brunch in The Ambassador and queued for the very popular Breakfast Club, only to give up when it became clear its popularity would mean a very long wait. I was really keen to try out Franco Manca’s pizza – widely regarded as the best in Britain – in Brixton but, again, the big queue put us off. We went for pie instead, where my London friend Dean had to endure a long and tedious rant about the lack of pie in Dublin and the great injustice perpetrated by the South William pub.

London is great, and it’s eminently possible to discover genuine cheap eats all across the city. Indeed, it’s significantly cheaper to eat there than in Dublin; you could quite conceivably eat out three times a day for £10. I’m looking forward to the return visit.