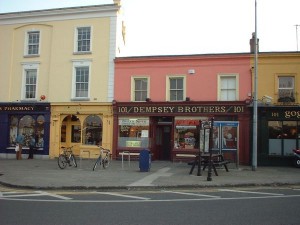 Way back when people were sneezing cash and feeding it to their cats and gerbils, Bistro Spice was well ahead of the curve. While the rest of us were bathing in fillet mignon and sleeping with tins of foie gras – you mean you weren’t? – this unassuming little Indian restaurant in the reasonably well-to-do southside suburb of Monkstown was already offering excellent value.

Situated in the heart of the village, just next to Dempsey’s pub, it’s always been an afforable option for a cheap night out, because you can bring along as much of your own wine as you wish and there’s no corkage charge.

And the food’s great too, as I rediscovered with a takeaway a few weeks ago. It’s in and around the price you’d expect from an Indian takeaway, but it’s particularly good quality. I was impressed by the unusual Sesame and Chilli Chicken dish (€9.90): a generous (for an Indian)  portion of chicken in a hot yet delicate sesame sauce with a hint of Thai spices.

The naans – a good arbiter of Indian food in much the same way hummus speaks volumes about Lebanese restaurants – were really special: piping hot, freshly made, perfectly crisp and bubbly outside, and light and fluffy inside.

My friend Elaine’s dish, the Bistro Biryani (€11.50), was as juicy as this rice dish should be, and came with a decent salad and raita. The poppadoms were complimentary, and the food arrived promptly. Recommended.