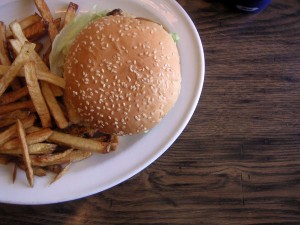 I got a right telling off from an irate waitress recently.

You know when you’re really looking forward to a big juicy burger? I ordered one, with chips, from a very popular restaurant in Dublin city. But the meal was profoundly disappointing. The patty was remarkably dry, and was served with only a smidgen of very bland home-made ketchup that tasted more of tomato puree. The chips were warm, not hot, and they were pretty soggy. It was so unappetising that I promptly lost my appetite.

My dining companion, a chef, listened to my gripes and suggested I send it back. But when the waitress came and asked if everything was okay, I bottled it. In my limited defence, I had the odd idea that the food might start tasting nicer if I only gave it more time. I spent the next 20 minutes pushing the food from one side of the plate to the other.

When the waitress returned for our plates, she asked if everything was alright. My complaints all spilled out. Instead of an apology, I got an exasperated sigh. She reminded me that she had asked if all was okay, that I had said it was, and that the time to speak up had been earlier. “If you’d complained, I could have sent it back,” she said. “I could have brought you a new dish, but now there’s nothing I can do. Next time, you should speak up.” Then she walked out of my life.

I was about to get all indignant when my fellow diner, who is a chef, told me that I was indeed in the wrong. And he was right. I normally am the complainer, but this time my critical faculties failed me. I told him about a family member who is terrified of complaining because she thinks the chefs will spit or snot in her food. He assured me this would never happen in a kitchen, and that if it ever did, the chef wouldn’t just be fired – the Gardaí would be called. The most annoying thing for chefs and waiting staff, he said, is when customers eat most of a meal and then complain, or when they wait until the very end of a meal to air their grievance.

That was me told. I’m not naming the restaurant because I don’t think it would be fair; I should have complained at the time. I’ve learned a valuable lesson. Do you complain in restaurants? Are you too scared? And have you ever had post-dinner regrets?