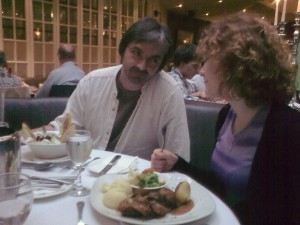 Forks at the ready

I love love love Kilkenny and, late-night drunken wrecks collapsing over the streets aside, chuckled my head off at the Cat Laughs festival a few weeks ago – I refuse to credit the sponsor, who forced me to drink their muck all weekend. I particularly enjoyed stand-up from the refreshingly sweet and lovely Fred Cooke off the Spar ads, as well as an imaginative contemporary vaudeville act from the Pyjama men in Langton’s Set Theatre.

After the Pyjama men gig, a few of us went to dinner in Langton’s restaurant, where we spotted a major discrepancy on the menu. Several items on the set dinner worked out significantly more expensive than if you ordered them separately from the a la carte. So, the value menu was nothing of the sort, and was to be avoided. Once I spotted this, our table was very wary of this bizarre pricing structure, which was either an outrageously offensive swizz or a case of sheer stupidity on the part of the managers. 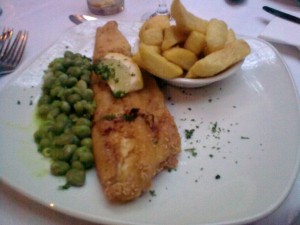 But we were too high on laughter to protest too much, so we simply made sure not to fall victim to this nonsense. And we were hungry. Langton’s had the feel of a big, cavernous ballroom, but nonetheless had a great buzz. There were easily 100-150 covers when we were there. And yet, it’s very well run: the service belies just how busy the place is, and the silly menu aside, it’s a very professional outfit. The waiting staff never broke a sweat.

I went for the fish, chips, and mushy peas (€16). It’s a simple dish but one that, more often than not, fails to live up to its potential. This, however, didn’t disappoint. Even though we were in Kilkenny, the fish tasted off-the-boat fresh. The batter was light, crumbly-crispy, and full of gentle flavour without dominating the fish; the chips were big, chunky, and fluffy; and the mushy peas came, as they often should, from a decent can. Other meals – bangers and mash (€13.50) and a big Greek salad (€12.50) didn’t disappoint – not an easy feat in a very busy restaurant.

The total bill for four dinners, a glass of wine, a Coke, two desserts and two espressos, before tip, came to €80.50. Not super cheap, but pretty good value for what you get. Just beware their set dinner menus.