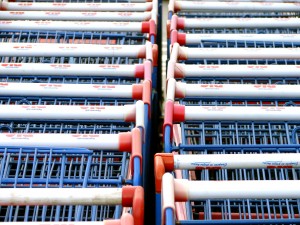 Keep retailers on their toes and shop around

It was this time last year that Cheapeats covered a price comparison survey by The National Consumer Agency of Ireland that showed a drop in food prices in Ireland in the first half of 2009.

Well, it would seem that dream is over and prices are creeping back up across the board.

All was revealed in a worrying Sunday Times article about a Eurostat report on price comparisons across Europe. The report showed that Irish consumers are paying over the odds for home-sourced foods such as meat and dairy and groceries in Ireland are the second dearest in Europe after Denmark. Here are a few of the reports findings:

Everybody across the economy has taken a cut but the retailers have increased their margin. So why is this? Retailers blame wages, rent and commercial rates but a Fortas report showed that although there is a higher cost of doing business in Ireland, it’s nothing to the extent that the industry states.

It would seem that we, the Irish consumer, are part of the problem. Back in 2008, consumer demand for lower prices sparked a price war among retailers but Irish shoppers seem to be falling back into old ‘Celtic tiger’ habits, becoming more complacent and shopping around less. Be warned people, if we, the consumer, relax and don’t split the basket, retailers will go back to their old ways and we’ll become a rip off republic once again.

Have you noticed a sneaky increase in food prices and are you shopping around less?