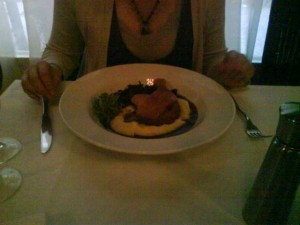 A few months ago, Jimmy and I headed to Greene’s on McCurtain street in order to avail of the menu for Dine In Cork week. Greene’s would be a little out of our budget normally, with mains at €25 or so, but at €25 for three courses and tea or coffee it seemed worth a try.

One word sums up our experience of Greene’s – ‘grand’. The staff were a mixed bag, we felt rushed even though we had plenty of time before the next sitting, and the food was nothing special.

One of our waiters was top of the class in his snooty-waiter school. I think he had that disease whereby if he smiled it would have cracked his face and killed him. I ordered a glass of red wine and when he brought our wine he gently placed a glass of white in front of me. Having that in-built assumption that I must be in the wrong I apologised and said I thought that I ordered red (which Jimmy says I definitely did) and received a look that suggested I should just be grateful I got any wine at all!

On top of that the glasses were seriously stingy. It was the size of glass you would expect if the wine was included in the set menu but considering we were paying extra I would have expected a standard sized restaurant or bar glass of wine – which this certainly was not. Overall, I wasn’t that impressed by the service. We knew we had to be out in two hours but I’ve eaten in other restaurants where that’s been the case and I didn’t feel rushed. Everything seemed rushed tonight. Even when we were ordering we had to order our dessert at the same time as everything else which seemed a little unnecessary.

The food was…fine. For starters I had the seafood chowder and Jimmy had the French onion soup. Now I know I’m biased, but my mum definitely does nicer chowder and french onion soup! They were decent portions and they were both tasty, but there was too much tomato in it. I wasn’t blown away.

For the mains I had the duck confit and Jimmy had the ribeye steak. Jimmy’s steak was done perfectly and he had no complaints about his main. The Duck confit was served with parmesan mash and red cabbage with a rosemary jus. The combination was a little too heavy for me, so as always I was full before I’d finished (I certainly couldn’t complain that I was going home hungry). The mash was good, the red cabbage was lovely and the duck was perfectly done but I think maybe my expectations were just too high. And the desserts were up to the standard of the rest – they were grand. I had the creme caramel and Jimmy has the chocolate torte. Personally I wouldn’t be tempted by either of them again but they weren’t awful.

If the aim of Dine in Cork was to give a taste of restaurants to entice people to come back when they had to pay full price, Greene’s failed. Don’t get me wrong, we both enjoyed our meals but I’ve had nicer. Knowing the normal prices of Greene’s I obviously expected something special. Greene’s just didn’t deliver.