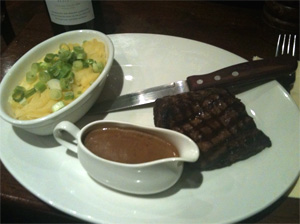 My gorgeous pal Geordie Sue and I recently went on the hunt for a restaurant in Terenure.  We planned the evening well, by going for a bunch of pints first with no clear idea of where or what we wanted to eat, and then spending way too long in the pub.  We found ourselves tipsily blundering around the streets of Terenure at 10pm, just as many of the restaurants were starting to close up.

We agreed that we’d like to eat ‘anything’ and finally got a table in JD’s Steakhouse.  It didn’t look hugely appealing as it was nearly empty, but it was a rainy Thursday night in Terenure, and the streets weren’t exactly hopping.  They also had a decent offer on display – two courses for €17.95 until 10pm.

Despite it being after ten, the nice lady running JD’s said we could avail of the offer. The menu is very traditional steakhouse – starters like chicken wings, deep fried brie and pate.  The mains included a range of steaks, all with a supplemental charge, and lasagna, burger and chips, fish and chips and so on.  We had starters of chicken wings and deep fried brie.  The brie was good, but the wings had way too much sauce on them.  Wings are a messy proposition at the best of times, and this didn’t help.

For our mains, Sue ordered a lasagna, which was the big hefty cheesy lasagna of her dreams.  Very well made and tasty.  I am usually put off by supplements on menus, but realised that only having to pay €5 extra for a fillet steak was a pretty good deal.  The steak was fantastic; big and perfectly cooked, with the most mouthwatering charred crust.  It came with a very generous helping of delicious pepper sauce and ‘champ’ – I’m not sure if it was really champ as it was just mash with spring onions scattered on top, rather than mixed throughout, but it was creamy and nice and made me happy anyway.

We were pleased with our food, particularly for the prices that we were charged.  The service was also very nice – we were the last table in the restaurant but never felt rushed out.  Because the place was empty, there wasn’t much in the way of atmosphere.  This can’t really be helped on a quiet evening, but one thing that definitely can be helped is the choice of music.  The playlist in JD’s Steakhouse was unfortunate, to put it mildly. While we ate, we were treated to the sounds of Michael Bolton, Ronan Keating and other perpetrators of crimes against humanity.  This is the kind of small detail that makes a big difference, and can easily be remedied.

I would definitely recommend JD’s Steakhouse for steak aficionados – it’s so hard to get a reasonably priced steak in Dublin.  It’s a restaurant that deserves to do well, as they’re offering good value (their ‘Early Bird’ runs from 5pm till 10pm, Mon-Thursday) and well-prepared, unpretentious food.

Have you tried JD’s Steakhouse?