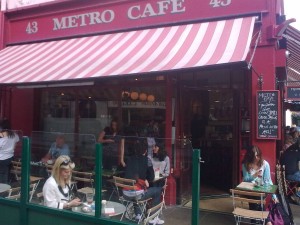 By my estimation, summer weather will resume just after the Electric Picnic, before officially shutting up shop on Monday September 27. Just a hunch.

So, there’s still time to drain the dregs of the sun dry. For Dublin city dwellers, one of the most pleasant ways of whiling away the summer hours is sitting outside a cafe or bar – like one of them fancy Europeans – with a coffee or beer.

Metro Cafe, just off Stephen’s Green, is one of the best people watching and sun soaking spots. Although I’ve had mixed experiences with their breakfast food and there’s much better spots for the soup/ sandwich type food they churn out, there’s still something alluring about Metro.

It’s one of the busiest cafes in Dublin, partly due to its prime location just off Stephen’s Green and partly due, I’m assuming, to its very delicious cakes and coffees. I grumbled and groaned about the €4.65 price tag on the lemon drizzle cake, but it was worth every penny and more: sweet and tangy, moist and fresh, and designed by The Creator to become one with fresh cream. The only problem was restraining myself from more. My friend Ciara had an equally delicious banana muffin (€2.65), but was mostly interested in the top.

We were both trembling from an earlier caffeine overdose so opted for two juices instead. My mango and apple may not have been freshly squeezed, but neither did it come from concentrate, and it was delicious – even at €2.60 for a glass (what is with the price of juice everywhere?). Ciara had a cranberry (€2.60).

We spent a pleasant hour in the sun, waving at and hiding from people we know. I’d happily return for coffee and cake, but I still think I’ll pass on the mains.