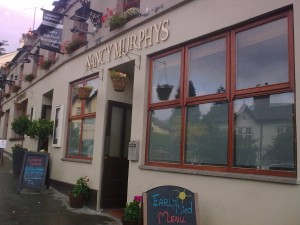 Nancy Muphy's pub, Enniskerry, Co. Wicklow: one of the most unpleasant meals I've ever had

I’m done with not complaining in restaurants. When the cream in a friend’s recent Irish coffee was horribly sour, she was reluctant to send it back – it was just so embarrassing. So I did it for her.

I thought I’d figured out the trick: don’t take the problem personally. They didn’t pour in rancid cream to spite the customer. Instead of a pompous “how very DARE you serve ME sour cream”, simply state the objective facts.: “Excuse me, the cream in this coffee is sour.” The staff were rightly apologetic, the coffee was replaced, and taken off the bill. Problem solved.

I thought I had complaining all figured out. But a recent experience at Nancy Murphy’s “gastropub” in Enniskerry, Co. Wicklow, left me lost for words (at the time at least – I have a few choice ones now). I ordered the fish and chips with mushy peas, one of those simple dishes that’s usually a good indicator of a kitchen’s skill. The €14.95 price tag seemed pretty steep, so I was hoping for something special.

What was banged down on my table was very far from what I had ordered. Lo and behold – there were no mushy peas. No explanation. The hot fish was instead served on a bed of lettuce, which was almost wilted before I called the waitress over. Her back was already up before I got to say “excuse me”. I asked if the peas were on their way, and was told that the kitchen was out of mushy peas. “Sorry about that,” she muttered as she walked away. 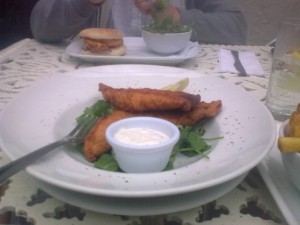 Sorry, hold on. I called her back – again – explaining that I had ordered fish, chips, and mushy peas from their very extensive menu because that is what I had wanted. If I had known there were no mushy peas, I wouldn’t have ordered it.

The very unfriendly waitress then informed me that they didn’t know that they had run out of mushy peas until the fish and chips were ready to serve. Nothing she could do. Too late now. “It’s not my fault,” she said.

I was genuinely astonished. Of course it’s not your fault, I responded. But you’re my waitress, so you’re the person I have to complain to. Could I see the manager?

I am the manager, she said. Then she cast a disinterested look over her shoulder, before explaining that she wasn’t really the manager – just in charge tonight.

This really isn’t good enough, I said. I had to ask, repeatedly, what she planned to do about it. Clearly, nothing. She could replace it, but I’d still pay full price for the meal. She could bring a bowl of peas, but of course my meal – and my friend’s – would go cold while I waited. She could take one drink off the bill, but I was drinking tap water and my friend was having a Coke. If “you want” an extra free drink, she told me, she would have to talk to the bar manager. And he was busy, apparently, even though the bar had very few customers, so I’d have to wait about ten minutes for my complaint to be resolved. “Do you really want to wait ten minutes?” she asked.

I’ve never been so close to flinging a plate across the room and leaving. The waitress/ “manager” was  completely disinterested in my complaint. This was a really contemptible way to treat a customer. Sadly, there was nobody else to complain to. The meal wasn’t even nice: the batter was stodgy and unpleasant and the fish was bland. My friend’s Cajun chicken burger (€8.95) had about as much cajun flavour as chicken chow mein. It was dry, boring, and forgettable.

In the end, they served me a bowl of petis pois with mint – which in fairness, were nicer than the fish or the chips. That’s about the best thing I can say about Nancy Murphy’s pub. Oh, and they reluctantly took one drink off the bill. Other restaurants – Gotham Cafe comes to mind – would have taken the fish and chips meal off the bill.

This was just about the worst customer service, and one of the worst meals, I’ve ever experienced. I won’t be going back ever again, to eat, drink, or otherwise.