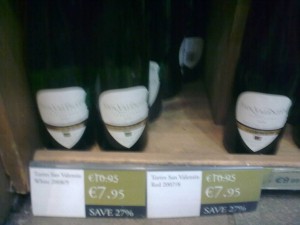 The sign couldn’t have been clearer: the wine was reduced from €10.95 to €7.95. Handy, as I had exactly €10 and not a cent more to bring a bottle to dinner (luckily, Aldi had provided a free dessert).

I got to the counter in O’Brien’s off license, where the sales assistant asked me for €10.95. They’d made a mistake, she said.

She wasn’t budging. Neither was I. A stand-off ensued. You have to sell it to me at the advertised price, it’s the law, I boldly asserted – of course, I’d never been less confident of anything. She coolly but politely declined to sell me the wine for anything less than €10.95. This went on for about three minutes or so, until eventually her colleague caved when I started taking pictures. He’s taking a picture, he clearly means business.

Turns out, according to both the Consumers Association of Ireland and the National Consumer Agency, that I was wrong.

I had no “right” to be sold the wine at the displayed price:

Shops can and often do make an honest mistake about the prices they display. A common example would be where some price labels are wrong and the marked price is lower than what the price should be.

In such a situation your staff at the till need to point out that the marked price is wrong, then the customer has the choice whether they are willing to pay the proper price or put back the goods without buying them.

So, I had no “right” to buy the wine, and they were not “breaking the law” by their initial refusal to sell it. I was being a complete chancer, but it worked. As a result, I was able to bring a decent bottle to diner. In my defense, the law may be on their side, but they should have sold me the wine at the advertised price. I could get used to standing my ground.

Readers, do you stand up for your rights – even when you’re wrong?