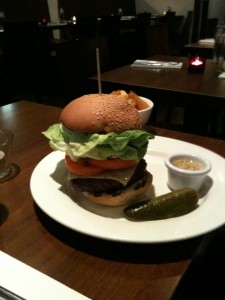 Just because it’s got a cocktail stick in it, does not make it a gourmet burger. Nor does its impossibly large size: too big to eat without a car jack holding your mouth open.

So what turns an ordinary burger into a “gourmet” burger? For a start, the cow should have been massaged on a regular basis. It should live a carefree life in the Japanese hills. Oh, and during the summer, it should be fed a diet of premium beer.

That’s the least I expect for a burger to truly qualify as gourmet. Such a burger exists, if you’re willing to shell out an extra €15 for it: the kobe beef burger at Gourmet Burger Company in Ranelagh.

I tried kobe beef over four years ago, prepared by a top chef at an extravagant Christmas party just before the bubble burst. It barely tasted like beef as I knew it: rich and full flavoured, slightly sweet, buttery, juicy and highly marbled. Soft and tender enough to cut with a blunt plastic fork.

But that was steak. And this was a burger. The charming waitress in Gourmet Burger Company could sell prayer books to the devil, but much as I wanted to try it, I was very reluctant. Very. Who wants to spend €25 on a burger, before the chips are even factored in? I could have two early bird meals for that. 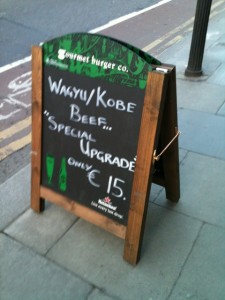 My dining companions told me I’d finally lost it. Sure, a steak they could understand. “But a burger is a burger, it’s a burger, you’re ridiculous.” I was, of course, being ridiculous; I couldn’t afford it and it was an absurd purchase. But as my friends know, I sometimes wildly abandon my senses and rebel against this Cheapeats tag that I’m attached to, only to regret it later when I’ve spent all my cash on lobster but can’t afford bread for the week.

The kobe burger was really delicious. Cooked medium, it was completely different from my two companion’s burgers, which by comparison were tough as old boots. This was buttery in taste and texture, and it fell apart in my mouth.

Kobe aside, we also got a portion of onion rings, which at €2.95 are significantly cheaper than onion rings elsewhere (still €5.50 in Eddie Rocket’s). Unfortunately the rings tasted cheap too: completely drowned by the taste of oil. One other quibble: the lettuce wasn’t properly washed. I don’t care but plenty of people would. The other two burgers were grand, but nothing special – a little bit tough and lacking in seasoning. It’s not just me. A few native Ranelagh friends have also confirmed that Gourmet Burger Company needs some work.

Kobe beef is very expensive at over €100 per kg, so it’s not bad value at Gourmet Burger Company – if you can get past the idea that it’s “just a burger” (I suspect the waiting and management staff at GBC would baulk at that statement).

I did enjoy the kobe, but I think there’s better things to spend your money on than a €25 burger. I’m glad I tried it. But good value or not, it’s a novelty and a gimmick, and not something I intend to go for again.