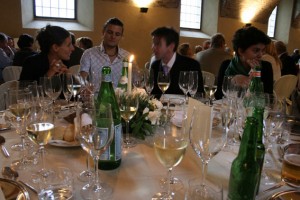 Getting a takeaway or eating out shouldn't be stressful (Photo: Sue Jefferson)

It’s how they deal with the fallout that determines whether or not the customer returns. Over a week ago, the local manager of a Diep takeaway branch put me off ever returning again.

A friend and I picked up takeaway in their Blackrock branch. When we got home, we realised that our order had been messed up: we had one main and a starter that neither of us wanted instead of the two mains we ordered.

“No big deal, these things happen,” is what I said – and meant – when I called to let them know. A few minutes later, I got a phone call from a very brusque manager, who insisted that I must have got the food I ordered. He refused to countenance the probability that the cashier had punched in the wrong order on their touchscreen system. He very reluctantly agreed to credit the account for one additional starter, didn’t offer an apology, and was completely indifferent to the fact that we were now down a meal and didn’t have time to pick up other food as we were due to go to a gig in about half an hour. In the circumstances, he should have offered a complimentary main. But he clearly couldn’t have cared less whether I ever ate there again.

On Friday, I wrote a letter to the overall manager of Diep outlining the events of that evening. At no point did I identify myself as a journalist; I never do in these situations as I firmly believe a customer shouldn’t have to wave their press credentials about to get decent treatment. If anything, it’s a poor reflection on a restaurant which suddenly changes their tune to a food critic, and I’d feel obliged to alert readers to such shoddy behaviour.

To Diep’s credit, the situation was handled very well. It goes to show that sometimes the manager being willing to apologise and make amends can really impress people. He contacted me straight away and said he would look into it. Yesterday, he rang to apologise. He admitted that there had been some errors made that evening, regretted that I’d had a poor experience, and expressed hope that I’d be willing to give them another chance.

Unfortunately, I won’t. Not only was the service appalling in this branch, but the food wasn’t great either. Being called a liar was a step too far, and I just couldn’t face going back to this particular outlet. I forgive the chain, but I can’t forget how I was treated in the branch.

It’s a shame, because  I would have been likely to go to the Blackrock branch quite a lot. I told the director this, but indicated that I would return to one of their other branches, which I certainly will – we’ve written positively about Diep a number of times on this site before. My account has been credited and the director has indicated that I will be looked after and compensated next time I order.

Kudos goes to the company for their quick and fair resolution of my complaint. Despite the unpleasantness, they’ve (sort of) managed to retain a customer. In fairness, there’s not much more they could do, and I couldn’t ask for more.