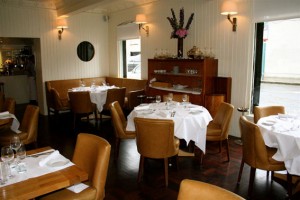 If customer service is poor, the restaurant will stay empty (Photo: Suzanne Jefferson)

We’ve been writing about customer service all week. I neglected to mention a gastropub where receiving any attention from the staff – to get menus, order, ask for water, or pay – was a real struggle.

In one Dublin pub, the barman grunted at me when I asked if he’d exchange an unopened packet of crisps for a packet of peanuts, and walked off without refunding the difference. This was after a week of truly awful service, so I just didn’t have the energy to complain.

Now, I’m not going out looking for trouble or offense, I’m a polite and fair person, and I’m conscious that most restaurants know how to treat their customers.

All that said, there is a serious problem with customer service in the Irish restaurant industry. The reasons are manifold. First and foremost is bad management. But there are others. Service staff, by and large, are not paid much above minimum wage. They’ve seen their pay packets slashed, they’re facing the prospect of further wage cuts for Sunday work, customers are leaving less tips, and many are made to feel that they’re lucky to have a job at all and so should tolerate whatever is thrown at them.

Fintan O’Toole’s article in Tuesday’s Irish Times sums up the situation for many low-paid workers:

The notion that the Irish low paid are living high on the hog is ludicrous. Hourly labour costs in the hospitality sector, for example, are already the third lowest in the EU. And the evidence shows that workers in the sectors covered by the system are just as likely to have taken wage cuts as those who are not; so much for the need for “flexibility”… The crisis is an opportunity to dismantle the minimal protections that vulnerable working people have gained over the last century. Because the elite will sacrifice anyone to protect itself.

It’s perhaps no wonder that some service staff are feeling pissed off, and I fully support  those who are fighting back against wage cuts. But there’s no excuse for bad manners or taking out your frustrations on your clients; if I, as a freelance journalist, was rude to people who buy my services, I’d quickly find myself out of work.

Too many waiting staff in Ireland – irrespective of the political climate or their personal circumstances – are simply rude. They do themselves out of tips, both by people not leaving any behind and by the inevitable effect poor service has on repeat business.

I know it’s a truism, but poor service simply wouldn’t be tolerated in America or many other countries where staff depend on their tips. Indeed, one commenter, Clare, who blogs at An American in Ireland, has expressed her surprise at the “horrendous customer service at so many restaurants here in Ireland.” Ireland’s reputation is shot enough; if tourists report that our customer service is as obnoxious as our banks, we may as well shut up shop.

Many restaurants either have a good reputation for customer service or they don’t. Managers who fail to understand this, and train their staff accordingly, are working in the wrong industry. These days, a disgruntled customer doesn’t just relate their bad experience to a few friends. He or she is just as likely to write about on a blog, post a bad review in MenuPages, and inform thousands of people on Twitter and Facebook. There’s no more room for complacency.

Next week, we’ll be running a competition which we hope will make a small difference to improving customer service standards in Ireland. Be sure to come back for your chance to win a very tasty prize.