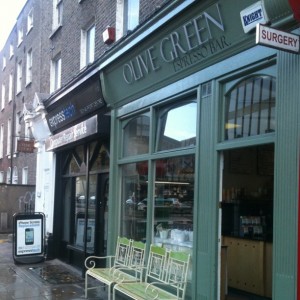 Pity the miserable denizens of that bleak stretch of Dublin I call Middle Baggot Street, a place dominated by the hulking Bank of Ireland headquarters and a series of grey office buildings.

Other Baggoty workers looking for lunch or coffee, either on the upper (before the canal) and lower (after Pembroke Street) sides, can head to Pablo Picante’s, The Unicorn, Donnybrook Fair, Sushi King, Chez Max, Searsons, Milano, Miller’s Pizza Kitchen… The list goes on.

Middling Baggot dwellers aren’t so lucky. If they’re looking for a quick bite or caffeine fix, they have the options of O’Briens Sangwich bar which makes me die inside, Cafe Sol, a newsagent, a pub that might just be the best lunchtime option, and a little takeaway coffee and sandwich bar called Olive Green.

I was of a particularly sunny disposition – Friday AND a cheque! – but was met with a scowl and a sigh of weariness. No mind, sure it’s Friday, they’re probably a wee bit tired, and they weren’t exactly rude.

– No salad to go with your spinach and ricotta quiche slice.

– Grand, can I have coleslaw instead? Also, a coffee, a double macchiato please.

The coffee was delivered, and the quiche and ‘slaw put in a brown bag. I handed over €2.20 for the coffee and €5.95 for the quiche slice. Got back to the car, and found the warm quiche had been placed in the same container as the cold coleslaw. On top of it, in fact. Not exactly best practice when it comes to food safety, and bringing an unpleasant warmth to part of the coleslaw and a slight chill to the quiche.

Still, the food was otherwise fine. The quiche had a delicate wobble and wasn’t overloaded with too many ingredients.

But the coffee. I don’t even know if I can write about it. On my first sip, I thought maybe some sour earth had accidentally flown into my mouth. So I had another sip. And promptly spat it out. Clearly made from badly burnt beans, this was far too bitter for human consumption. I threw it out and hoped the taste would go away. Three hours later, and after many glasses of water, milk, and Club Orange, the roof of my mouth pulsated with an acrid flavour. If an espresso bar can’t get coffee right, I don’t need to finish this senten…

It’s a customary cliche to end a bad review with a swipe, such as “I’d rather eat my own [insert something gross here] than go back to this place”. I’ll say this: I’d rather go to O’Briens.