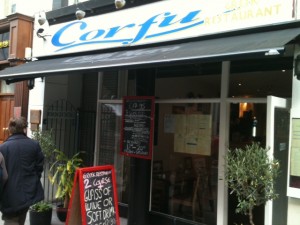 Dublin is poorly served by Greek restaurants. Besides Keshk in Donnybrook, which is a bit of a trek outside the city, there’s a Greek buffet called Ramos in the Epicurean food hall and then… well, precisely nothing.

In the summer of 2005, I fell in love with Greek food in, of all places, Vancouver. A brilliant restaurant called Stepho’s, which – honestly – had people queueing around the block every night, opened my eyes to the wonders of Eastern Mediterranean food. You really won’t find fresher, more vital food anywhere else in the world: olives, cheese, yoghurt, salad, grilled meats, rice, fresh fish and vegetables, dips, lots of herbs, and honey and nuts.

That’s why I have high hopes for Corfu, a new Greek eatery on Parliament Street. It’s only been open for a few months, on the old premises of Lebanese restaurant Sinner’s.  There’s a lunch special running until 6pm every day: two courses or mezzedes (a selection of Greek tapas) plus a glass of house wine or a soft drink for €9.95.

Jean and I, always on the hunt for somewhere new, went there for a quick bite on Culture Night last month. They were serving the early bird until 7pm that Friday, although I’m not sure if this is a long-term extension.

Corfu shows promise, but it needs a lot of work. We opted for the mezzedes. Some of what we got was lovely, some not so lovely.

First, the not so lovely. What I’m assuming was meant to be a tzatziki dip was grand, but it had far too much yoghurt and not enough cucumber, garlic or seasoning. The dipping bread was little more than white sliced pan, which is not robust enough to scoop up a dip. The manager may as well have visited our table to tell us he was cutting corners – decent bread is such a basic, particularly with Greek food, that it’s hard to imagine how they could get it so wrong. The feta parcels were nice, but too salty: I needed a jug of water.

But there’s plenty of potential here. The meatballs in tomato sauce, although they could have been a little warmer, were very tasty, and the chicken and lamb were perfectly seasoned and chargrilled. We shared a portion of baklava, which tasted fine but was a little bit stale.

The service was swift and friendly, the interior is pleasant, and as it’s the only Greek restaurant in town, I’m hoping it improves from a slightly shaky start. Nonetheless, I still enjoyed the meal. If they can fix the few kinks, it could become, maybe, one day, as big as draw as Stepho’s. I’ll definitely head back in a month or so for lunch, with baited breath.

Parliament Street, incidentally, is one of the best spots in Dublin for restaurants. More on that again.