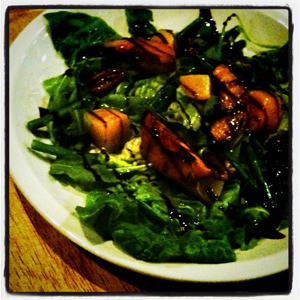 The grilled peach salad looked pretty but didn't quite work.

My friend Clare Q and I recently tried out a new(ish?) restaurant on Dublin’s Aungier Street: The Whitefriar Grill. It’s in the spot that was until recently occupied by Conrad Gallagher’s Salon des Saveurs, which in the grand tradition of Conrad Gallagher resturants, closed down. It’s a slightly quiet and dead stretch of street, considering it’s only around the corner from lively George’s St, but it’s worth swinging by to check out the Whitefriar Grill, as it’s pretty lovely.

We went down for the early bird/pre-theatre menu, which offers two courses for €18.50 or three for €21.50 and is served all night Sunday to Thursday, and from 5pm to 7pm on Fridays and Saturdays. It was fairly quiet at that time and we shared the pretty, exposed-brick and fairy-light festooned room with just a few other diners.

The early bird menu offered an interesting-sounding starter of warm grilled peach salad with golden beetroot, toasted pecans and a balsamic dressing. In reality, the salad was a little disappointing – all the ingredients were of good quality and well-prepared, especially the grilled peaches, but the combination didn’t really work particularly well. I expected the ingredients to really make each other sing, but that didn’t quite happen. 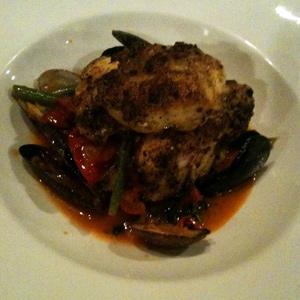 But oh boy oh boy, the monkfish was good

Our main course of monkfish was much more successful. It came in a lemongrass broth, with clams, mussels and new potatoes. It’s rare to see monkfish on a early bird menu as it’s quite an expensive ingredient, and this was beautifully done. Its Asian flavours were a real treat. Our only quibble was that the portions were on the small side and we finished our mains still feeling a little hungry. None of the desserts on the early bird appealed to us so we went off to the a la carte menu and ordered a chocolate brownie (around €6) to share. The dessert was delicious and could definitely not be accused of skimpiness: after half a brownie each and a coffee we were properly full. 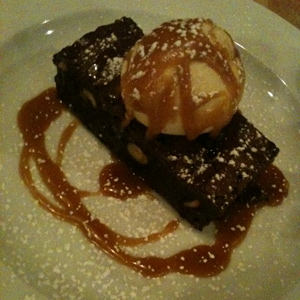 And the brownie. Great brownie.

Service was attentive and pleasant throughout. Two starters and two mains from the early bird, one dessert from the a la carte, two coffees and a bottle of Sauvignon Blanc came to an extremely reasonable €67.50. I will return.

The Whitefriar Grill is at 16 Aungier Street.  Have you tried it, and what did you think?