Have you ever tried black rice?  It’s available in most Asian shops but it’s something I rarely see on menus.  I first had it in a delicious salad,  in an amazing vegetarian restaurant in New York (it was years ago and I have tragically forgotten its name) and have been cooking it at home ever since.  Black rice is unmilled and comes with its husk intact, and is purportedly extremely nutritious.  Its other natural advantage is that it has a rich and complex taste, and can be used as the centrepiece of a dish rather than just as the carbs on the side.

Grilled Salmon, Stir-Fried Veg and Black Rice with a Lime and Wasabi Dressing 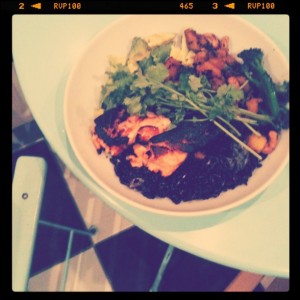 I made up this recipe myself, with my very own brain.  I’m a fiend for grilled salmon these days and it has the perfect colour and texture to contrast with the rich, nutty black rice.

The salmon: Combine the soy and honey in a small dish and brush or drizzle over the salmon fillets. Put under a hot grill for about 15-20 mins, until it has a charred crust and the salmon is cooked through. Check frequently as it won’t be as nice if it’s over-cooked.

The rice: At the same time, put the rice in a pan with lots of boiling water. Cover the pan (this is important as black rice is messy and will spatter everywhere) and simmer for about 20 mins, until the rice is tender.

The veg: When the rice and salmon have been on for ten minutes, add the veg to a hot wok with a tablespoon of sesame oil and throw in the cashew nuts.  Stir fry on a medium high heat for 10 mins, until the veg are cooked (but still crispy/al dente).

The dressing: Put the lime juice and wasabi in a small bowl and whisk together.

Combining the lot: Drain the black rice.  Put into a shallow bowl and mix the dressing in with a fork.  Lay the veg at the side of the rice and the salmon on the top.  I garnished mine with fresh coriander. It was very very very nice.

This recipe is from Nigella’s book ‘Forever Summer‘, which is full of gems and a cookbook I go back to very frequently.  This one is a particular favourite – the raw ginger, lime, chilli and garlic give it an amazing fresh kick.  You can use ripe avocado instead of or alongside the prawn, and Nigella says that the dressing can be used as a dipping sauce to be served with chicken, or steamed broccoli or pak choi.