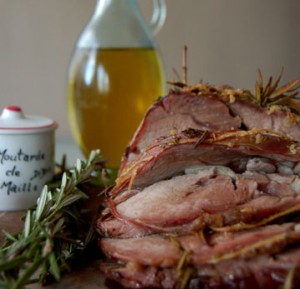 Forget the Easter eggs. Easter is for roast LAMB.

Does anybody pay full price for Easter eggs any more? Almost every supermarket seems to have them on special these days; as I noted last year, if you buy them at full price, you’re officially a chump.

I’m not a massive fan of Easter egg chocolate. Firstly, the mass-produced Cadbury/ Nestle/ Mars eggs are kind of rank. Second, the excessive packaging sends me on a big long rant. Third, chocolate doesn’t matter (there, I said it): the traditional centre-piece of an Easter get-together should be a lamb dish – ideally roast lamb.

SuperValu has an Easter lamb deal, with 33 per cent off the lamb leg (butcher counter only: was €14.49 per kg, now €9.71 per kg). Aldi have a great lamb offer, with a leg costing just €6.49 per kg: the deal is available this Tuesday. Check out my recipe for roast lam marinaded in red wine, rosemary, rock salt, garlic, and lemon from last year, or go for Jacqui’s Slow Roasted Lamb with a Rosemary, Lemon, Garlic and Anchovy Crust. Aldi’s lamb is cheap, and delicious.

Despite my griping, I’ll still be miffed if I don’t get at least one bundle of chocolate in some format. I’ve noticed that a new trend is creeping in over the past decade or so: instead of giving Easter eggs, people are giving Easter presents. My sister gave our nephew a load of cans of Coke instead of eggs, because he doesn’t really eat chocolate. I’ve seen other people give money. 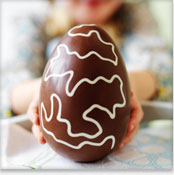 The egg tradition, of course, has nothing to do with the death and resurrection of Jesus and everything to do with the commercialisation of an old Germanic custom whereby a hare brought decorated eggs to children in honour of an ancient pagan fertility festival which later became appropriated by Christianity –

Ahem. Anyway… There’s some great deals on this year. Nestle, Cadbury and Mars easter eggs are gross, so I’m inclined to go for Lindt or M&S chocolate. As well as being delicious, both use significantly less packaging than some of the big brands, and M&S has some great alternatives, such as mini chocolate eggs and a chocolate bunny. Maybe I’m just a sucker for their food ads, which make me drop everything and wake up thirty seconds later in a pool of my own drool. How gross.

Some other options if you’re so inclined:

Will you give eggs as presents this Easter, or are they all for yourself? Or is it all about the lamb, bam, thank you ma’am? And a very happy Easter  weekend to you.