You may remember our Bloggers Recommend series from a while back; we thought we’d try and get a few new posts going as 1) them there bloggers are only deadly with the tips and 2) quite a few of the original places recommended in 2009 have since closed down. Oh dear.

But all hope is not lost, as we’re kicking off again with some great tips from Joanne of Stitch and Bear, one of our favourite Irish food blogs.

About Joanne and Stitch and Bear

Joanne is the blogger behind Stitch and Bear, which details her eating journey around Dublin and Ireland. Originally from Cork, Joanne loves living in Dublin, and is very pleased by the current wave of creativity and innovation in the Dublin drinking and dining scene. Joanne’s work as a consultant takes her all over the country, and often further, providing her with plenty of inspiration for the blog. Stitch and Bear aims to cover all restaurants, from high end to cheap and cheerful. After all, a good meal can be found in the unlikeliest of spots, and doesn’t have to cost a fortune.

One of the best things about moving to Dublin was regular access to authentic Asian food. In the early 2000s, I ate in the first wave of Chinese restaurants that opened in the old Moore St, and which were just as quickly closed down by the Health Inspectors. Grotty dinginess aside, these restaurants opened my eyes and tastebuds to real Chinese cooking. In the years since, my tastes have been honed, and I’ve become a devotee to Hunan and Sichuan food. I’d estimate that I eat in an Asian restaurant at least once a week. Most of these restaurants offer great value for money with generous portions. 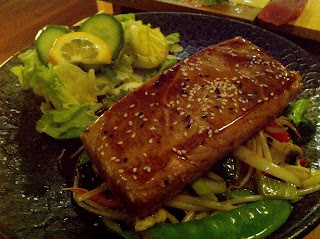 So let me take you on a little walk through Dublin’s Chinatown where I’ll point out some of my favourites. Starting near the junction of Parnell St and O’Connell St, my first stop is the lovely Korean restaurant Kimchi at the Hophouse. Moving along Parnell St, towards Capel St, we come to Mandarin House, which offers wonderful Chinese food (Tip: Try the Four Seasons Green Beans – spicy!!). Turn onto Capel St and walk down to the Hilan, which offers a mix of Chinese and Korean food, with authentic BBQ burners set into the tables. The Hilan offers great value lunch deals. Continuing on Capel St, my last stop is close to the Liffey, at Musashi Japansese restaurant. This restaurant is newly opened, with a clean and stylish wooden interior. Prices are affordable and the food is tasty.

If you’d been paying attention on my little tour of Chinatown, you would have noticed the Black Sheep Pub on the corner of Capel St and Parnell St. A sister pub to Against the Grain on Wexford, it sells only craft beers, bottled and in cask. This reflects a growing trend across the country, where beer and cider drinkers are starting to turn their backs on mass-produced beers. Instead, they are choosing Irish-brewed beers & ciders such as those from 8 Degrees Brewing, Dungarvan Brewing Company and Stonewell Cider. This movement is all about supporting our own independent brewers and finding tasty beers to drink. Surely it’s worth paying a little extra for that?

But what if you don’t want to drink beer? After all, Ireland has one of the highest rates of coeliac disease in the world. Personally, I like a good cocktail. Now I don’t mean some frou-frou drink with bucket loads of sugary juice and an umbrella. I mean proper adult cocktails like martinis and old-fashioneds. Unfortunately, good cocktails don’t come cheap, so I like to reserve them for more special occasions. Some seriously good cocktail joints have emerged lately including the Cliff Town House on St Stephen’s Green, Harry’s on the Green (be warned though, music levels can be high here) and finally for the tequila and rum lovers, new Mexican restaurant 777.

A recent find was the Izakaya bar, underneath the Yamamori Oriental Cafe on S. Great George’s St. Here it’s possible to sample a wide selection of Japanese beers, sakes and spirits. There are loads of drink specials chalked on the walls around the bar, and it’s possible to order a selection of finger foods to slake your hunger. On a recent visit, I enjoyed a Sojito cocktail for €5, an alternative Asian take on the ubiquitous Mojito. 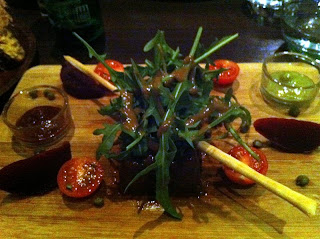 One annoying thing about eating out can be the cost of wine in restaurants. In the worst cases, the wine list can be dull and overpriced. Seagrass in Portobello are doing things a little differently by operating a Bring Your Own Bottle (BYOB) policy with no corkage charge. Add in an excellent value Early Bird menu with tasty food from chef Sean Drugan and you’re onto a clear winner. Word of mouth is causing the popularity of Seagrass to soar, so make sure to book in advance.

In the last few years, I got very tired of going to pubs in Dublin city centre. It felt as if a lot of venues had lost their soul, either as a result of refitting to Celtic Tiger Ireland standards, or the playing of loud generic music that drowned out conversation. Today, vintners are having to face the reality of a very different Ireland, where punters are choosing to stay at home rather than going to the pub. One of my wishes is to see pubs turn off those horrible sound systems, to offer simple, good value food (where possible) and preferably to start selling better selections of wines and beers. In other words, pubs would turn into all-day venues, rather than being solely for nighttime drinking. This model is very popular in Amsterdam (where I lived for a year) and I can’t see why it wouldn’t work here in larger towns and cities.

The mention of “de continent” got me thinking about my second wish. I’d like to see more local bistros and neighbourhood restaurants.  Rather than going to a city centre restaurant with sky-high rents to pay, I’d like to support a chef who has set up in a community and cooks for that community. The Lovely Food Co in Terenure and 161 Cafe/Bistro in Rathmines are two examples of small, popular local venues. More of the same please.

Thanks so much Joanne, some excellent tips!  What do you think of Joanne’s recommendations?