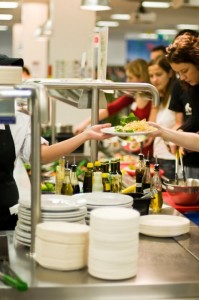 Over Paddy’s weekend, I was lucky enough to take part in an excellent masterclass in investigative journalism* offered by The Guardian newspaper in London. For a news wonk like me, it was a real thrill to be in the building – and, wow, what a beautiful, modern, state-of-the-art building.

I was equally excited to be in the home of the Observer Food Magazine, which I buy religiously. My lefty leanings perhaps naturally attract me to The Guardian and The Observer, but strip aside the political orientation and you’re left with a publication that excels creatively and leaves its dull rivals in the shade.

The offices are based in King’s Cross, the biggest transport hub in London, so there was plenty of choices for lunch. But, perhaps because I mostly work from home and largely avoid the creepy concept of colleagues, I’m always fascinated by the idea of the work canteen (I also have daydreams about people leaning against water coolers discussing whatever it is people talk about around office water coolers – presumably soaps, sport, and the deliciousness of water).

The Guardian and Observer

Standards vary wildly across work canteens. The Guardian’s is in an impressive space, but the food wasn’t exactly the divinely inspired joy nuggets I expected from the home of the OFM, with most staff appearing to leave the building for lunch. One thing it certainly was: cheap. My lunch was just over £2 (about €2.40-ish).

Not as cheap, of course, as lunch at Google, which costs zero euro and zero cent.

Limitless food, coffee, tea, drinks, sweets, fruit: lunch in Google’s Dublin office is a special experience. Years ago, a good friend of mine who used to work there was saving money for a round-the-world trip, so she had breakfast, elevenses, a big lunch, afternoon coffee and, sometimes, dinner in Google. I suspect she may have taken home the odd bit of fruit as well. Is that okay? It meant she only had to have a tiny bit of food in the house for over the weekends, and saved a small fortune.

Because of my weird fetish for work canteens, I recently had lunch there with a good Google friend of mine – they’re allowed sign in friends for lunch occasionally so we can all feel terrible about how crap our workplace benefits are. The Google office has around four or five excellent canteens, including a soup/ sandwiches/ salads place, pizzas, sushi, and a hot food counter. Our lunch was in the salads and sandwich place, but really enjoyable. Fresh focaccia bread, hearty soups, freshly made salads, beautiful cold meats, and a big slab of chocolate cheesecake were better than what you’d get in many very good cafes. I had to refrain from over-doing it.

Another work canteen I’ve been in a few times is that of The Irish Times (I’m freelance but in the building a handful of times a year). The canteen was rubbish, so all the staff were leaving and heading across the road to McCabe’s, an excellent deli on Tara Street. Eventually, it made sense for McCabe’s to take over the catering for the paper, and the staff canteen has proven popular. As for McCabe’s itself, I think it may have closed down, but I’m open to correction.

Do you have a work canteen? Is it as good as Google’s, or is it grim? Should companies subsidise canteens, and is a nice work canteen be an attractive perk for a job? Can you invite me for a free lunch, following which I’ll slag off your canteen right here? Share your thoughts.

* I don’t normally veer too far from the subject of food on this site, but had to mention the masterclass. The course was given by Paul Lewis (award-winning coverage of the UK riots, exposes on undercover policing, special projects editor of The Guardian) and Heather Brooke (MP’s expenses, Wikileaks cables). It was inspiring, exciting, informative, and hugely innovative. They’re not afraid to pioneer and develop new methods, and the course is well worth a look for anybody working in journalism, PR, NGO’s, campaigning or advocacy, national or local government, research, or law. It’s not currently scheduled again, but details should appear on the Guardian masterclass website when it is.