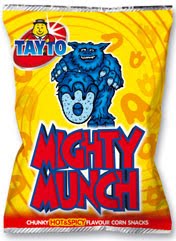 Now, it’s really not like me to have a grievance at all, but…

Don’t you hate when the size of the packet stays the same, but the contents shrink dramatically? Before I fled Ireland for the summer, a packet of Tayto’s gourmet treat, Mighty Munch, was the most recent offender. The bag was half full, or half-empty, depending on your point of view, and contained precisely 11 crisps for my 80c. It was very easy to count them. I even bought a second and third bag just to, you know, test.

It’s far from the biggest injustice in the history of food in Ireland, but slightly irksome none the less. I know that food producers are required to state the product’s weight on the packet (26g!), and I presume that they would have to flag “New! Less crisps for the same money!” I’m not bothered enough to weigh successive packets of crisps, and besides I’m not in Ireland this summer.

It seems to be a consistent (minor) irritant: it’s very irksome when a food producer hasn’t filled the bag to capacity unlike, say, a packet of Cheesy Wotsits, which is always quite full.

Thankfully I’m now distracted by rainforests and mountains instead of crisps. However! On another crisp-related note, my Irish friends in New Zealand recently introduced me to the wonder that are Rashuns: cheesy bacon flavoured crisps. They’re so disgusting that I’m picking the crumbs of the third bag from the keyboard as I type and throwing the fourth and fifth bag out of the apartment window.

Readers, what food products have got your goat recently?