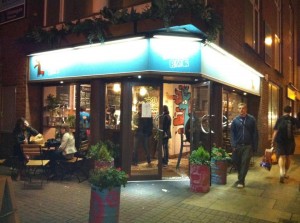 Burritos: it’s probably as exciting as sun-dried tomatoes hit the shores in the mid-1990s, or when pizza arrived in Ireland, which must have been sometime in the 1970s.

Now cheap burritos are everywhere: Burritos and Blues on South Anne Street and Wexford Street, Pablo Picante’s on Baggot Street and Clarendon Market, Boojum on the Millenium Walkway. As with all new and exciting crazes sweeping the nation, it begins in Dublin. I couldn’t find a decent burrito in Cork, although last year I did have a burrito disgusting enough to rant for hours about it to my unfortunate friends Jimmy and Cat; it had sweetcorn in it. Enough said.

Anyway, I was staying a friend’s house in Rathmines a few months before I left for Borneo and other places, and was spoilt for choice when it came to restaurants/ takeaways/ cafes. The Little Ass Burrito Bar got my custom on one sober and one not-so-sober occasion.

It’s the usual deal: a selection of burrito fillings, choosing your own spice level. I had the Sancho Panza, which contained slow-cooked marinaded pork, black beans, jack cheese, sour cream, rice, and fresh coriander, for €6.90. There’s a counter to eat your burrito, but it’s not really a sit-down place. Still, I reckon it’s just as good as Pablo Picante’s, which is high praise indeed.

Update: Sadly, Little Ass has moved to Dawson Street, where it competes with very nearby branches of Pablo Picante’s and Burritos and Blues. Thanks, but nobody needs this level of burrito choice – they’re all relatively similar places. Little Ass was a great spot among the many cheap eats of Rathmines; let’s hope a branch reopens in Rathmines soon.

Little Ass have a reasonably decent lunch special from Monday-Friday, 11am-2pm: any burrito and a hot or cold drink for €7.

Have you tried the Little Ass Burrito Bar? Do you know of decent burritos outside Dublin? And where are the best burritos?