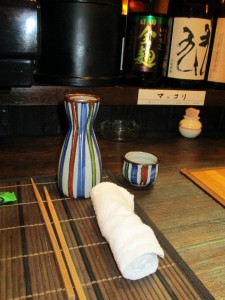 I still dream entirely in complicated Japanese symbols. Jean and I had an amazing time there last May; I loved everything about the place.

But I grumbled all the way home: Japanese food in Ireland could never match up to the real thing. I’d tried all the Japanese restaurants in Ireland and, frankly, none of them could hold a candle to the sushi, sashimi, shabu-shabu, tonkatsu, okonomiyaki, yakitori, gyoza, and ramen I’d devoured in Japan. I get hungry just writing that sentence.

I’d tried the new Oriental Cafe on Georges Street before I went on my travels, and was very disappointed with my meal. It was basically an Irish beef stew with noodles, and it just didn’t work. The Yamamori izakaya, just downstairs, fared much much better: here, you can pick up a selection of delicious small Japanese dishes alongside a helluva lot of whiskeys. I’ll write about the izakaya again.

But it was Musashi, the new spot on Capel St., that I’d heard much about. I headed there for lunch with my friend Roisin last Saturday, full of Japanese politeness and zen. This BYO place charges €4 corkage: not bad, but not as good as some places that don’t have a corkage charge, such as Seagrass and Keshk.

Inside, it’s all clean-cut, neat, and simple: wooden tables and floors, small red cushions adding a dot of colour. It really has the feel of a Japanese restaurant. 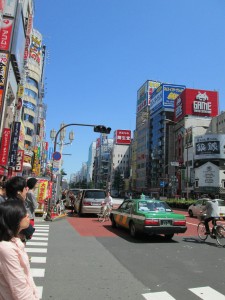 A taste of Tokyo in Dublin (Photo: P McGuire)

We were both really tempted by everything on the menu (tempura, gyoza, ramen, teriyaki…) but decided to go with the special, and some sushi on the side. I had the YakiUdon: stir-fried and lightly curried udon noodles with chicken, tiger prawns and seasonal vegetables combined with egg. This was really delicious, fresh, had just the right amount of seasoning, and wasn’t too oily. It was topped with proper pickled ginger rather than the red over-processed shreds that often infest cheaper Japanese food.

Everything here is as neat and simple as you’d expect from Japanese food. The service was unusual: they hovered around waiting for our order and then were so efficient and quiet that we forgot they were there.

The total bill for six pieces of sushi, two lunch specials, and a 7-Up was €27.67 before tip. On first impressions, Musashi will give Yamamori and Ukiyo a real run for its money. It’s much cheaper than both, and I’ll definitely be back to devour my way through the evening menu and inflict more reviews on you. I’ll bring a bottle.