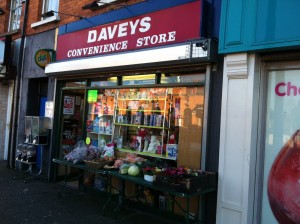 In today’s Irish Times Pricewatch, you’ll find my article on value (or lack of value) outside the main supermarkets.

One local shop that I didn’t mention is Davey’s, a small, independent convenience store right beside a Centra in Rialto, Dublin 8. The friendly owner, Davey, has been in business for almost 30 years, drawing in customers by dint of being welcoming, having an enormous range in his tiny shop, and being competitive on prices.  Many locals, myself included, generally saunter past the Centra without a second glance. In Davey’s, there’s always a smile and a chat from the staff, and I’ve even gotten to know some of the neighbours just by chatting to them in the shop: something that never really happens in the likes of your local Spar or Londis.

As well as being a spot for picking up fuel, plants, fruit, vegetables, and groceries, Davey’s is the go-to place in this neighbourhood for all sorts of things you can’t normally get in your local convenience store. When I needed a dog lead for that stray which turned up on the doorstep over Christmas, I knew Davey’s would have it out the back (plus some local advice on how I might go about finding the dog’s owner, or re-homing it). When a friend needed emergency L-plates, sure of course Davey’s had them out the back. Need a rat trap? Drain unblocker? Tutu? Davey’s is also one of the last places you can find proper penny sweets (or two cent sweets, or whatever the kids are calling them these days). They’re always selling chocolate bars at three for €2 as well. Davey’s isn’t always cheaper on everything, but the essentials – milk, sugar, and salt, for example – were less expensive than next door.

As Spar, Centra, Mace, Gala, and a few others homogenise our towns and villages, it’s refreshing to see places like Davey’s surviving. This isn’t just a nostalgia fest: places like Davey’s are hugely important anchors in local communities, giving a vital sense of place and continuity that could otherwise dissipate all too easily.

Do you have a local shop that’s surviving the might of the convenience store? Sing praises here.