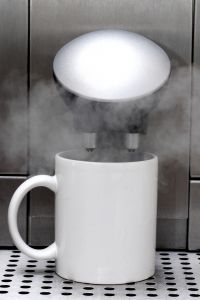 I heard about the Italian Suspended Coffee movement for the first time only recently, and was really pleased to hear that a kind-hearted and industrious Irish lady is already making it happen over here. As is typical of so many Italian things, it’s simple and elegant.   Aoife Ryan, who’s started the Suspended Coffee Ireland movement, explains:

“It began in Italy several years ago. The idea behind it is that a member of the public when purchasing a tea or coffee for themselves buys an extra one and suspends it. This means the person takes one with them and the other one is left with the shop until someone comes in and asks if there is any “suspended coffee”. They will be given the one that was paid for earlier. This scheme is intended for people who need a warm drink and can’t afford to purchase one themselves.”

Aoife got started by contacting Paddy McKenna on 2fm, who mentioned in his show and also spread it to Hector’s show.  The interest so far has been great, and the following coffee shops are already signed up:

Aoife has been contacting charities so they can tell the people who use their services about the scheme, and there’s great potential for it to grow and grow. If you’re a coffee shop owner you can get in touch at the Suspended Coffee Ireland Facebook page to find out more. If you’re a coffee shop customer, this is a lovely opportunity to do something small to brighten up the day of someone in need.  Well done Aoife – keep us posted on how it’s going!