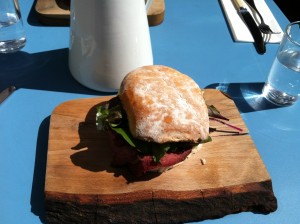 Check out this gorgeous little nibblehole in the basement of the Little Museum of Dublin on Stephen’s Green, offering very reasonably priced all-day breakfasts and lunches.

Immediately, you’ll notice the aesthetics, and observe that a lot of thought went into the look, feel and design of Hatch and Sons. It’s good to have a cafe option on Stephen’s Green. So how’s the food?

Well, it’s good enough for me to be planning a third visit. The menu consists of breakfast/ all-day staples such as granola with yoghurt and seasonal fruit (€3.50), fry-ups (€7.50). There’s also a “Baker’s Basket” to frighten all the coeliac Atkins-diet types: a scone, soda bread, and a slice of brack (€4.90).

Throughout the day, you can get a Waterford blaa with various fillings – a simple sausage blaa costs €4.50, and comes with nothing more than a little butter and sausage in bread. In one way, I liked that the sausage blaa wasn’t crowded out with lettuce and sauce and superfluous stuffings but, although it was tasty, I’m not sure that the sausages themselves packed enough flavour to carry it off. The spiced beef blaa with coolea, onion relish, and rapeseed mayo (€5,70), was an unparalleled success: so damn good.

Salads, in and around €10-12, feature alongside tried and tested favourites such as fishcakes (€10.80) and Beef and Guinness stew (€9.90), as well as daily soups and specials. There’s also a very visually tempting selection of cakes, but my co-diner’s lemon-raspberry coconut slice (€3.80) was a real letdown: far too cold and hard, and I’ve yet to branch out to try something else.

The big problem with Hatch & Sons is the service. It’s very friendly and nice but, on two separate occasions, I found it really, really slow. That said, it should hopefully improve with time, and it’s certainly not enough to put me off a return visit – as long as I wasn’t in a rush.