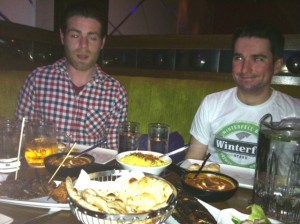 It was someone’s birthday, or something, or nothing. I forget. When my friend Simon suggested “the new Indian tapas place” off Grafton Street, I rolled my eyes and contemplated whether to moan, complain, give out, or rant about the proliferation of tapas and “tapas-style” places popping up everywhere of late. I went with rant, pointing out that there is a proliferation of chancers getting away with charging €12 for a tapas dish, so that you end up paying €24 two small-medium sized portions, instead of around €15 for one solid portion.

Simon wisely ignored me, and four of us headed out to Indie Dhaba, which occupies the basement spot vacated by French restaurant Venu. Dhaba has two evening sittings, one from 7pm-9pm, and one from 9pm till closing. This is quite a large space, but it was absolutely buzzing when I showed up a little late.

It’s a reasonably familiar format in, amongst others, Japanese and Spanish cuisines: smaller portions arrive at the table when they’re ready, and everyone shares. I was pleased to find decent sized dishes at good prices. Most of the small plates are in and around the €5 mark, while larger plates are mainly from €9-12.

We went for… eh, lots of stuff. Oh, go on then – but I’m going to unashamedly rob the descriptions from the menu without much, or any, further elaboration. Small dishes first, with prices:

We all got a decent sized main as well:

There are quite a few tandoori options, but it’s refreshing to see a lot of thought go into the food rather than the same old options of tikka masalas and jalfrezis and rogan josh. Dhaba reminds me somewhat of Ananda in Dundrum, only cheaper and, dare I say it, better. Sorry, Ananda. 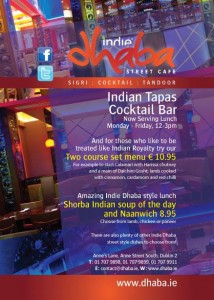 Dhaba has a really lengthy cocktail menu with some unusual drinks standing out, and most priced around €8-9. I really hated my “Cocktail of Two Cities” (Tullamore Dew, vanilla sugar, cream, egg white, cumin tincture, tahini paste, rose water and sparkling water). Yes, a cocktail with tahini paste is as gross as it sounds, but I drank it all down anyway and it was interesting to try. More successful were a Pineapple Martini and a “Lovin’ Spoonful” of Stolichnaya Gold vodka, gingerbread syrup, Dhaba Insanity chilli bitters, fresh raspberries and fresh lemon & lime juice: I’m a sucker for those three fruits.

Service at Dhaba is absolutely flawless, with patient, well-briefed, friendly, and efficient staff. We were happy to leave a good tip.

The bill for four small dishes, four big dishes, four sides, two desserts, a coffee, three cocktails, four beers, and four Bulmer’s was €166.70, or just under €47 each before tip. I reckon that’s pretty good value for a load of delicious food and drinks, great service, and a cracking atmosphere.

I love almost everything about Indie Dhaba. It’s a breezy, confident space, if perhaps a little brash – check out their Facebook page full of pictures of minor celebrities and models – but perhaps it’s the Irish begrudger in me that’s knocking it. As we were leaving, the manager came over and asked if we were happy with everything. Yes, we were, bar my bad cocktail choice, which led him to apologise profusely for what was clearly my mistake. He advised that the bar stays open late, so we’ll definitely go for the 9pm sitting another time, and make a full night’s eating and drinking out of it.