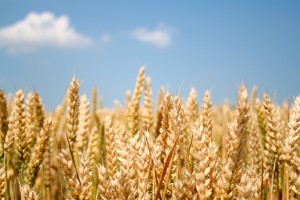 Wheat: public enemy number one, or the basis of modern civilisation? (Photo: StockXchng)

One of my favourite hobbies is winding up my coeliac friend Simon, by asking him if he is also allergic to the tooth fairy, homoeopathic potions, and levitation.There are many coeliacs out there, but I suspect – and I refuse to offer any evidence whatsoever for this – that some people with a self-declared gluten or lactose intolerance have wrongly convinced themselves that wheat and dairy are not only poisonous to them, but poisonous to humanity itself.

You know the type: always on a “detox”, cleansing their temples of “toxins” and looking down their nose at you for eating seven Stinger bars and three packets of Banshee Bones in the same sitting. Never mind that Irish people have the highest lactose tolerance in the world, or that Western civilisation was built on wheat (Before you all jump down my throat, I know full well that it’s not that straightforward, and that allergy levels vary from mild to severe: a good friend of mine is severely lactose-intolerant, while people with cystic fibrosis also have problems digesting dairy).

I know that Simon would dearly love to eat wheat and drink beer all day long: he genuinely does have a gluten intolerance. A few months back, we were at a gig in The Button Factory where Simon asked for the one drink he can have: a pint of Bulmer’s. The bar, however, was only serving one beer that night, and no cider. He explained that he was coeliac and couldn’t have a beer. The barman wasn’t very concerned, and suggested Simon have a soft drink. So he went without a drink, for the sake of a corporate sponsor, in a venue we had already paid into. Delightful. 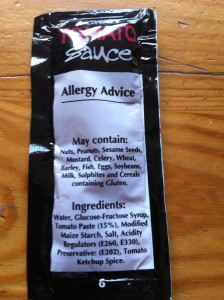 Allergic to anything? This ketchup advises you to stay at home, you loser

They seemed rather unprepared to cater for coeliacs: as much as I relish watching Simon suffer, I thought the outright dismissal and refusal to provide something as simple as a pint of cider was particularly thoughtless and unnecessary. It forcefully brought home to me how difficult it can be for allergy sufferers to navigate a restaurant menu (although I note that Milano have introduced gluten free pizzas options). And then I picked up a very cheap ketchup sachet in a chipper, which contained the following “allergy advice”:

None of those ingredients cropped up on the ingredients list. How does ketchup contain nuts, fish, or milk? Clearly, the producer is covering all bases in case of cross-contamination in the factory, but is it really that difficult to ensure that fish doesn’t touch off tomato paste in a factory that is clearly churning out lots of cheap foods? It struck me as simply lazy and careless.

As for the vinegar from the same chipper: it contains everything you could ever be allergic to – including mustrad (sic), sulphites, and fish – and is probably not safe for human consumption.

So, allergy sufferers. Do you find it difficult to eat out? Have you ever been frustrated by a careless or indifferent attitude from pubs or restaurants? Can you recommend a good restaurant or food product for allergy sufferers? And do you pay attention to the allergy advice on the ketchup sachets, or take your chances?