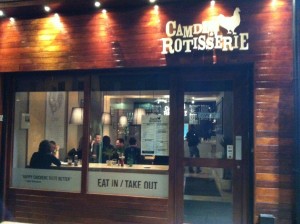 The former gastronomic black hole that was Camden Street has developed a nice little cheap eats scene. Green19, where all mains cost €10, is well established. Neon‘s take on Asian street food has proven popular. Cafe Sofia deserves more praise, more often. Camden Rotisserie, which serves rotisserie chicken, also struck me as reasonably priced when I passed by recently. My friend Colin and I decided to go in for dinner.

Colin was instantly convinced that Joe Macken – the Dublin restaurateur behind Crackbird, Jo’Burger, and Bear – must be involved in Camden Rotiserrie. He is not, but the owners do seem to have taken a leaf out of Macken’s rather successful book, with cheap and accessible menus and long benches in place in tables.

All the chicken is roasted, not fried. They serve burgers, wraps, and salads alongside the main attraction: quarter, half, or whole rotisserie chickens. A quarter chicken costs just €4.50, while a half is €8. The chicken is served with a salad garnish, but sides (€3 each) are necessary. Three sides between us was more than enough; for a lighter meal, one each would have done the trick.

Rotisserie chicken is never particularly presentable, so what can you do? Shove it in your mouth, that’s what. And this was really, really superb. The meat was deliciously tender, juicy, succulent, mouth-watering, and tasty. It had been seasoned perfectly, with crisp, partially blackened skin. We also ordered the piri-piri sauce (€2) but it was utterly superfluous: the chicken is good enough to stand alone and proud, while the piri-piri couldn’t match up.

Our bill for two half-chickens, three sides, and four beers was a very reasonable €43. although I later noticed that, for some reason, the piri-piri sauce was left off the bill.

Camden Rotisserie is an excellent spot for a dinner under €10 (or go for the quarter chicken with two sides for €10.25). I reckon that Camden Street and the nearby South Richmond Street which is home to Rotana Cafe, offers a viable south city  alternative to the stretch of cheap eats around Capel, Moore, and Parnell Streets in Dublin’s northside.

Have you tried Camden Rotisserie? And what do you make of the other cheap eats in the area?