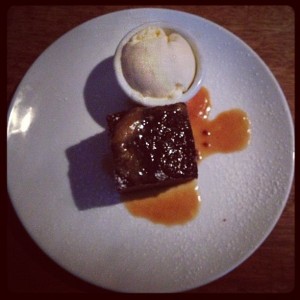 A few of us ate in The Black Sheep, a bar serving craft beer and food on Capel St, one midweek evening back in May.  At the time they were offering a very tempting deal of three courses for €15, available all night.

This sounds ridiculously cheap and might make you question the quality of the food, but they did it in a very simple and clever way – by offering slightly smaller portions. The meal gave you about as much food as a standard two course meal, but with the opportunity of trying more dishes.  It’s a nifty idea that I’d like to see more restaurants try out.

The choice of starters included goat’s cheese and butternut squash salad, mussels in garlic and white wine sauce and a carrot and coriander soup.  Mains were simple but hearty pub standards like a burger, fish and chips and a vegetarian lasagne.  Desserts were a very nice sticky toffee pudding with ice cream, or a lemon posset.  It was all tasty and good quality and the deal was one of the reasons I headed back there with friends recently on a Friday evening.

Unfortunately the three courses for €15 deal had gone, and the only special offer was an early bird which had ended at 7pm.  We opted for main courses only, which ranged from around €11 to €16.  I had the sweet potato and lentil veggie burger for around €11, which I thought was really excellent. I don’t usually go for veggie burgers, but this one was great – chunky, filling and full of spicy flavour.

Julie had a chicken, chorizo and chickpea stew, which she said was nice and tasty but a bit overpriced at around €13 as it was a very simple dish with very basic ingredients.  Strangely enough, the bowl of stew was presented on its own without potatoes or rice, or even a piece of bread to mop it up.  Our pal Audrey had fish and chips which she enjoyed, but also mentioned that she found it a bit steep at €14.

Another minor issue with the place is the more or less unbearable noise level. A certain amount of that is down to the acoustics of the room, but the music they were playing didn’t really help either, and it was way too loud to have a decent conversation over dinner.  We had planned to spend the whole evening there but after an hour of shouting and repeating ourselves, we decamped to another bar.

The Black Sheep is one of those places that I really want to like – the interior is great, and the owners clearly care and want it to be a welcoming place. They’ve added lots of nice touches like board games that you can borrow and play.  Plus while the menu is a bit hit and miss, there’s definitely tasty good value to be had.  If they could sort out the noise and bring back the 3 courses for €15 deal (which was one of the best around), it would be a gem.

What do you think of The Black Sheep?