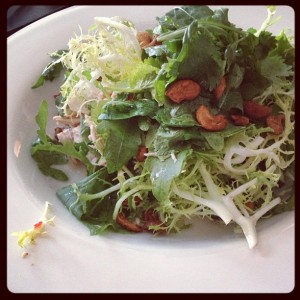 Odessa is a bit of a Dublin institution and is very well regarded for its brunch.  I’ve had mixed feelings about it in the past – I’ve had some quite overpriced dinners there, but I like that they constantly offer deals and interesting options on their menu, such as their €11 soul food menu.  Odessa has been around for donkey’s years, and any restaurant that can survive the roller coaster of the last decade has to be doing something right.

I was recently looking for somewhere to go for lunch with a big group from work, and noticed that Odessa’s lunch menu was both very reasonably priced and full of interesting options.  (See the lunch menu on their website – it’s the second link on the left).  There was plenty for the vegetarians, and plenty for around the €6 to €8 mark, with nothing costing more than €10.

Our group sampled the burgers, the soup, the salads and the sandwiches – portions were ample and reports were good all round.  My Vietnamese Chicken Salad (€9 for a large portion or €6 for a small) was really tasty.  I’m keen to try some of the other things on the menu, such as the fish sliders, the veggie burger or the quesadillas. The only things that would make me hesitate about going back would be that firstly, when we were there, the place was exceptionally dead.  They serve lunches upstairs in the club area; I don’t know why they don’t serve them in the much airier and friendlier ground floor space.  Secondly, the food took ages to arrive, even allowing for the note on the menu stating that burgers take extra cooking time.

I’d definitely recommend the lunch in Odessa, as it’s rare to see such a well priced menu with so many interesting choices.  Just bring your chattiest friends, and don’t order the burger if you’re in a hurry.