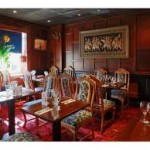 Ballsbridge, in the heart of Dublin 4, is an affluent area with fancy houses, and thousands of office workers looking for lunch every Monday to Friday. But until relatively recent times, it was crying out for as much as a decent sandwich. Roly’s Cafe and Bistro is a prominent option, but there’s a much better deal to be found.

Last week, I met my sister in Ballsbridge on her one-hour lunch-break. She took me to the Baan Thai, situated above a row of shops near the American embassy.

The small, relatively dark space was packed, but we were served very quickly, and the food arrived within a few minutes. It was, as my slightly smug sister had proclaimed, extremely impressive for the €7.50 price tag.

We both chose Ginger Chicken, which came with plenty of rice. Thai food is often, frustratingly, toned down for the Irish palate, but Baan Thai – I’ve also eaten in the Leopardstown branch – is definitely one of the more authentic Thai restaurants in Ireland. We were both struck by the freshness of the ingredients, the clear but not overpowering ginger and soy flavours, and the generous portion sizes. We were fed and watered within an hour – so crucial at lunchtime – and both agreed that we will happily return.

Next time, I might try the curry. Recently, I had a Thai green curry in Koh, and felt as though I was drowning in a salty ocean, so I have higher hopes for Baan Thai’s effort.