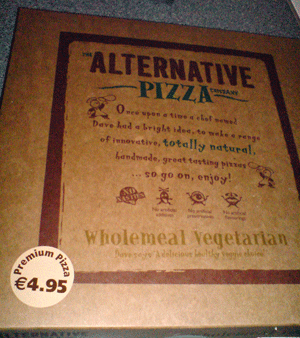 I’ve often wondered why you can’t buy pizzas with wholemeal flour bases.  I supposed that there wasn’t enough demand for them, and that I’m the only person who is naive enough to think that substituting white flour for wholemeal will turn pizza into a healtheir treat.  The only place in Dublin that I’ve ever seen wholemeal pizzas was in Donnybrook Fair, where the price was predictably outrageous.

However, when I was in SuperValu on Monday spotting frozen food bargains, I saw the ‘Alternative Pizza‘ in their fridge compartment.  There were two varieties; vegetarian and pepperoni.

The pepperoni that you find on pizza gives me the shudders, so I went for the vegetarian option. The brown paper box meant that I couldn’t see the pizza, which made me slightly concerned, but it turned out to be pretty good.  It was tasty, with a layer of cream cheese under the mozzarella which made it rich and satisfying.  The base was a bit too thick and the toppings could have been more imaginative (peppers, black olives…meh) but that’s often the case with frozen pizzas, and you could always spruce it up yourself with extra toppings at home (jalapeno peppers!).

Best of all, it was only €4.99 – more than most frozen pizzas, but not by much, and a good price for one that wasn’t all bleached white flour.  It was substantial enough to be cut in half and spread over two lunchtimes, making for two very cheap lunches indeed.  The Alternative Pizza doesn’t have any artificial flavourings, preservatives or additives.