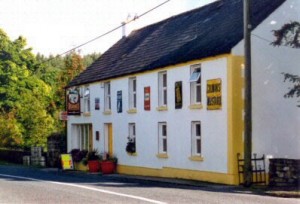 To hell or to Connacht. For the past ten years, there’s been a wave of immigrants into Leitrim and Roscommon. They’re mostly younger people. People who didn’t quite buy into the excesses and hype of the boom years and wanted somewhere a bit quieter, or cheaper. A bit of space to think or create.

I love heading over to this beautiful part of Ireland. Last weekend, we went to visit friends in Leitrim. We spent the evening in Beirne’s of Battlebridge, a pub in Roscommon that’s just a few minutes away from Leitrim town. According to local tradition, Battlebridge was a site of a battle in 1798, and it marks a major crossing point on the River Shannon, where the native Irish were driven west of the river by Cromwell’s army.

Mike Cleary, the manager and cook at Beirne’s pub, refurbished this place around a year ago. It’s been in the Beirne family for 100 years now and holds great traditional and contemporary music nights. Great beer garden out the back, private marina, a campsite and a children’s playground.

Really comfortable and welcoming inside, with stove fires constantly on the go. Best of all – the food. This is cheap eats at its best. My natural suspicion of a pub menu with samples of food from all across the world was quickly allayed. Chef Mike doesn’t do anything by halves. There’s a Warm Winter Vegetable Salad for €8, and Thai Green Chicken Curry with Poppadoms and Rice or Penne Bolognaise for €10.

I had Bangers and Mash, only €10. These were locally produced pork-filled Toulouse sausages with a perfectly consistent Spinach Potato Mash and a fruity gravy, prepared from scratch. It hit the spot perfectly and was better than any I’ve eaten out anywhere.

We shared a great big pizza for €10. Again, everything prepared from scratch. None of this petty nonsense of €1 per extra topping, €2 for for fancier toppings, and €3 for toppings that are much too fancy to be seen in public with us. You can pick from chorizo, ham, sweetcorn, tomato, mushrooms, olives etc. Have as many toppings as you like.

The food is cooked by someone who clearly cares about good quality ingredients and decent food that doesn’t have to cost the earth. It was so good that we came back for a ridiculously good value, delicious breakfast. Great sausages, quality bacon, sauteed mushrooms and potatoes, beans, tomato, pudding, an egg, bread, and tea or coffee. It was only €8 but I’d happily pay double – it’s been ages since I had a breakfast this good.

Leitrim, Roscommon and Battlebridge are beautiful places to visit. Irish band Hoarsebox are playing in Beirne’s on March 7 so I’ll head back for this.