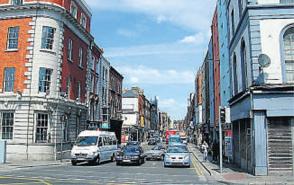 You’ll always find some of Dublin city’s cheapest food around the Parnell, Moore, and Capel Street areas. Over the years, this part of the north city centre has witnessed an explosion in some great Chinese, Korean, and other East Asian restaurants.

Being skint like everybody, we headed there the other day in search of a special offer lunch. A lot of places had good deals on, and we settled on a restaurant full of Chinese people – usually but not always a good sign – at 120 Capel Street, the name of which was displayed only in Chinese writing (Inside, the menu informed us that it’s called Chuan Chinese Restaurant).

They had a good set lunch offer: starter, main, and a drink for €9.90. I opted for the Spring Rolls to start; nothing special and quite instantly forgettable. John chose the Chicken and Sweetcorn Soup, which was perfectly fine if a little bit unusually spicy.

The mains – Sizzling Prawns with Ginger and Spring Onion and Beef with Chilli and Coriander – were much better. They both came on big plates, with large sides of rice, and plenty of meat, vegetables, and sauce. Both mains had good strong flavours and were good value for what we were paying.

I thought the service was very good. After waiting 15 minutes for our mains – ever so slightly more than we expected – the waitress raced over and apologised for the tiny delay. Even though we hadn’t complained. She gave us each a can of Coke by way of apology.

All in all, it’s more or less like what you’d get in a standard Chinese takeaway, only this is cheaper and has table service. The special offer runs until 5pm every day, so you could even check it out for an early dinner.