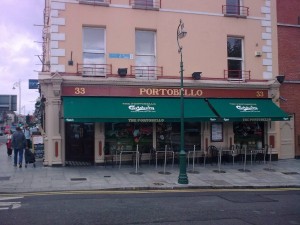 “Happy hours” were banned long ago. Ireland, apparently, was sinking into a drunken stupor of binge drinking; we needed to be be saved from ourselves.

But wait! Suddenly the law reveals itself as quite absurd indeed. The Portobello’s deal was running from 3pm-7pm – hardly prime drinking hours – and was mainly attracting in pensioners, locals, and city workers looking for a quiet pint at a decent cost. Meanwhile, south Dublin nightclub Burn Beach club in Stillorgan was running a regular Saturday night, all drinks for €2 promotion called “2 IS HOT”, advertised by a picture of two barely clothed young wans. This, according to Meas is perfectly fine: Burn’s offer ran all day and did not constitute a “happy hour.” But which offer – The Portobello’s or Burn’s – do you reckon is more likely to encourage binge drinking? 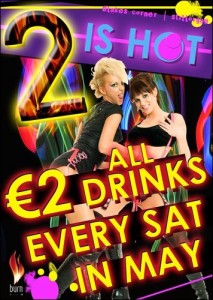 Meas says this promotion is fine, but that quiet pub The Portobello will turn us all into a nation of binge drinkers. You figure it out.

I wonder which bright spark at Meas had a look at the rules, glibly told themselves that rules are rules, and used their inflexible might to put the kibosh on The Portobello’s promotion?

I beat no drum for the pub industry, and I don’t think it’s particularly sad that many of them have shut their doors over the last decade. But this ruling defies logic. Pubs are subject to the downward price pressures as everybody else. Here was a publican trying to respond in a reasonable way to consumer demand- €4 a drink is hardly the world’s greatest bargain and is unlikely to draw in binge drinkers looking to get sozzled fast- and he’s stopped in his tracks by yet another inflexible pen-pusher.

What do you think? Were they right to call a halt to the Portobello’s promotion? Should nightclubs be allowed run promotions? And most importantly, do you want cheaper beer?