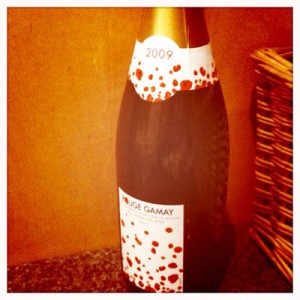 Superquinn recently sent us a nifty cooler bag with a selection of festive foods to try out and write about here.  They chose a few items from their traditional Christmas range – Christmas pudding, Christmas cake and cranberry sauce; and some party foods – cocktail sausages, pate and ribs.  The bag also contained a bottle of sparkling red wine, which was a new concept to me.

I passed the  Christmas cake and pudding on to a mammy who will try them out and report back, and tried out the party foods myself.

Cocktail sausages – these came precooked in a bag, which can be frozen.  Superquinn’s sausages are justifiably renowned, and these were certainly very delicious. I’m not sure about the precooking though, as sausages are not exactly arduous to prepare.  I drizzled maple syrup over these before putting them in the oven, and it gave them a very festive stickiness.

Piri-piri ribs (€3.99 for 525g) – these can be oven cooked, and can also be frozen.  I’m dubious about the suitability of ribs as party food, as they’re just so messy and undignified to eat.  These ribs would be better suited to eating alone or with a non-judgemental companion and a beer. That said, tey were excellent: the piri-piri  marinade had just enough spiciness to give it a kick, but not so much that conservative eaters would be frightened by it.

Chicken liver pate – this vacuum-packed pate had a good flavour and was very nice spread on some wheaten crackers.

Rouge Gamay sparkling red wine – this one caused a bit of consternation.  I expected it to be a bit like sangria, as it is served chilled, but it turned out to have all the depth and heaviness of red wine, accompanied by bubbles.  It was an odd combination, and not really for me.  However, out of the four of us who tried it, the person who was initially the most skeptical about the idea was the one who liked it most of all.

What do you think is the best party food? And what would you do with sparkling red wine?

NB: I have asked Superquinn for the prices of all these products, and will update the post when they arrive.